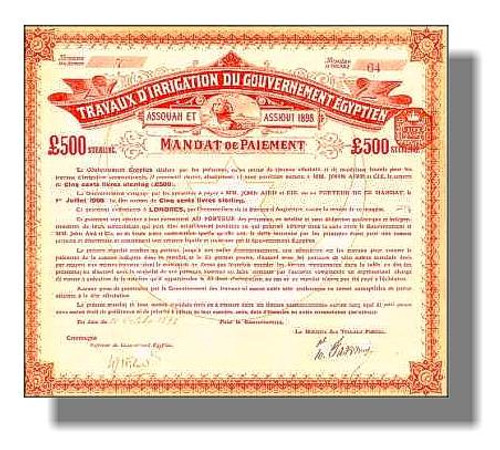 Beautifully engraved Certificate from the Travaux D'Irrigation Du Government Egyptien issued no later than 1902. This item is hand signed by the Organization's officials and is over 116 years old. This Historic Egyptian Bond has a Sphinx Vignette, and a Star and Moon Underprint, and is printed in French and was issued for 500 English Pounds. 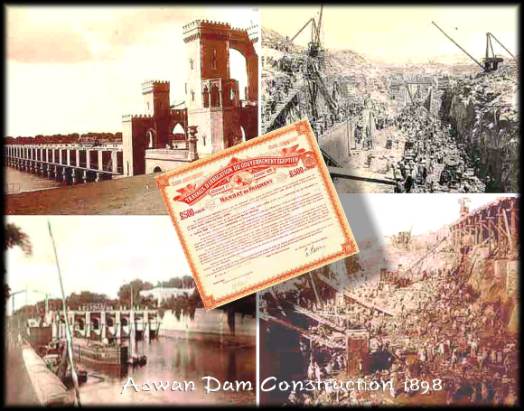 In 1898 the Egyptian Government commissioned John Aird and Co for the construction of dams on the Nile at Aswan and Assiout. So as to spread out over time the cost of the project to the Egyptian Government, the bonds were issued with a series of dated pay warrants to a total value of £4.7mn payable over a 30 year period - 1903-1933. All these warrants were all purchased from Airds by the Irrigation Investment Corporation Ltd, who raised money for the transaction by means of a public issue of certificates at 4% interest. The construction of the Aswan Dam and the associated Asyut weir were some of the most ambitious engineering works of the early 20th century. Completed in 1902, they transformed Egypt's ancient irrigation from a basin to a perennial system. This great project was designed by Sir William Willcocks and involved some of the foremost British engineers of the day, among them Sir Benjamin Baker and Sir John Aird. In June 1902, a year ahead of schedule, John Aird and Company, London, completed the majestic, 2km long masonry dam at Aswan. Queen Victoria, who died in 1901, did not live to see the dedication, but the dam was one more grand achievement of the colonial era to which she lent her name. Designed to a parsimonious esthetic by Sir Benjamin Baker, the Aswan Dam was a marvel in an age of civil engineering marvels. It changed for all time the regime of irrigation in Egypt, which had already been irrigated for at least 5000 years. Today we think of the 1902 dam as a stepping stone along an historical path that was to lead inevitably to the High Dam in the 1960's, to surging population, economic development, and modernity: A linear path of dam development on the main course of the Nile. But there had been al-ternatives in the late 19thC., now faded from memory. One was a concept originated by Pharaohs of the Middle Kingdom to divert the Nile into the Libyan Hills of the western desert and there store it below sea-level depressions. The Nile is really two rivers, which differ sharply, giving the stream north of Khartoum a character peculiar among the great rivers of the world. This peculiar character molded Egyptian civilization, and in so doing, deeply influenced the cultural history of the world.