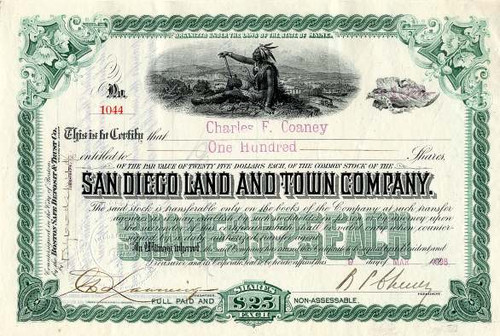 Beautifully engraved certificate from the San Diego Land and Town Company issued in 1898. This historic document was printed by the American Banknote Company and has an ornate border around it with a vignette of an Indian looking over a town. This item is hand signed by the company's president and assistant secretary and is over 120 years old.

Certificate Vignette
The San Diego Land and Town Company was the real estate arm of the California Southern Railroad, and is credited for developing Chula Vista, the Sweetwater Dam and the National City and Otay Railroad. They were owned by the Atchison, Topeka & Santa Fe Railroad Company. The company was formed for the purpose of improving and disposing of the lands donated by the people of National City and San Diego to subsidize the construction of the California Southern Rail Road. 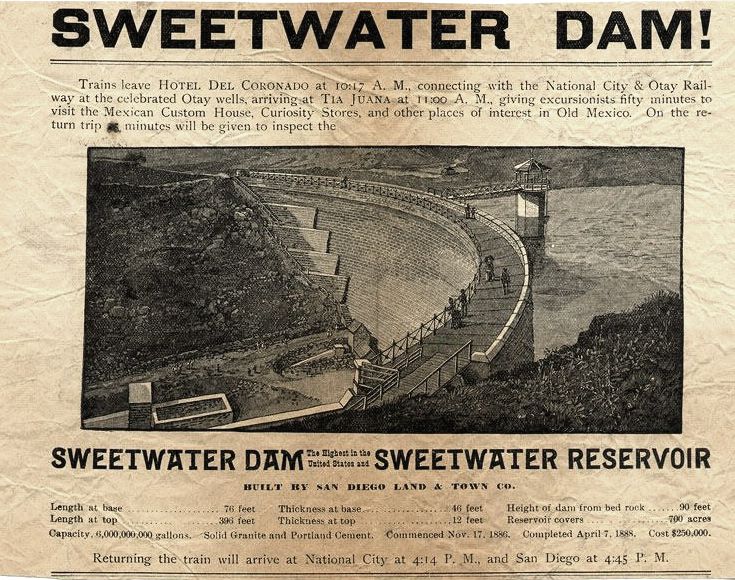 Sweetwater Dam Ad - Shown for Illustrative purposes
Chula Vista's first library, an 1891 reading room formed by volunteers, was located in a building donated by the San Diego Land & Town Company. The original Chula Vista Yacht Club began in 1889 when the San Diego Land and Town Company provided the new settlers of Chula Vista, most of them farmers, with a waterfront park to use for social gatherings. This certificate is very historic and is only the second one we have seen.