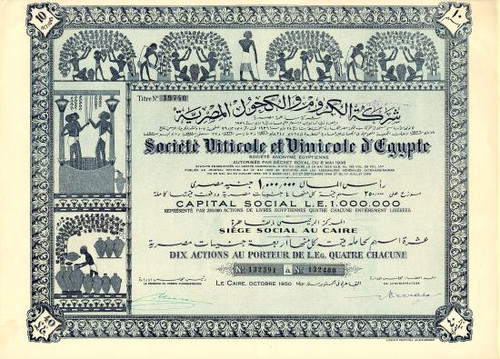 Beautifully engraved Certificate from the Societe Viticole et Vinicole Egypte issued in 1950. This historic document has an ornate border around it with various vignettes of men depicted in ancient times picking grapes and making wine. This unusual item is hand signed and is over 65 years old.

Certificate Vignette
Egyptian wine has an extensive history within Egyptian civilization. Grapes were not native to the landscape of Egypt, rather the vines themselves are hypothesized to have been imported from the Phoenicians, though the actual origins remain in dispute. What is known, is that by the third millennium BC, Egyptian kings of the first dynasty had expansive wine cellars, and wine was used extensively in the temple ceremonies. The main consumption of wine in Egypt took place between the king, nobles, and the priests in temple ceremonies, and is evidenced by numerous painted relief's, and other archeological evidence. The vineyards of ancient Egypt were quite different from the modern methods of wine making today. As viticulture (or wine making), ceased to serve an exclusively ceremonial purpose, the Egyptians began to experiment with simple structures for their vines to train on, as well as found a way to train their vines so they were easy low maintenance bushes, and found ways for the soil to retain more moisture for the vines. Egyptian wine making experiments included the use of different wine presses, adding heat to the must (the grape juice ready for fermentation) in order to make the wine sweet, and differences in vat types and materials. The finished product was poured through a cloth filter, and then into earthenware jars, where they would be sealed with natural tar and left to ferment. The Egyptians kept accurate records of their vintages, and the quality of their wines, each jar of wine was clearly labeled with its own vintage and quality. The search for the recipes and wine types of the Egyptians have yielded mixed results within the delta region of the Nile. Due to the climatic changes since the time of ancient Egypt, quests for the right vine, the right mixture of materials, and other factors, have left the modern renditions of ancient Egyptian wine with something to be desired. Nestor Gianaclis, set out in 1903 to find the mixtures of Egyptian wine, as well as the necessary growing conditions, to create wine which tasted the same as the primordial counterparts of ancient Egypt. Nestor searched out areas throughout Egypt, looking for the right type of soil, moisture, and grape which could grow a wine worthy vine. With the aid of Egyptian ministries, seventy three conventional grape types were tried in addition to Nestor's twenty he himself had bred. Once the ideal soil type was found (similar to the soil of Champagne, France), it was not until 1931 that the first modern rendition of ancient Egyptian wine was produced. This rendition of the ancient wine continues to be made in the present day, however, many wine connoisseurs consider it of poor taste. Regardless, the taste of the ancients is still present 3,500 years later. References: De Blij, Wine: A Geographic Appreciation. Rowman & Allanheld: New Jersey, 1983. Lichine, Alexis. Alexis Lichine's New Encyclopedia of Wines and Spirits Third Ed. Alfred A. Knopf: New York, 1984.