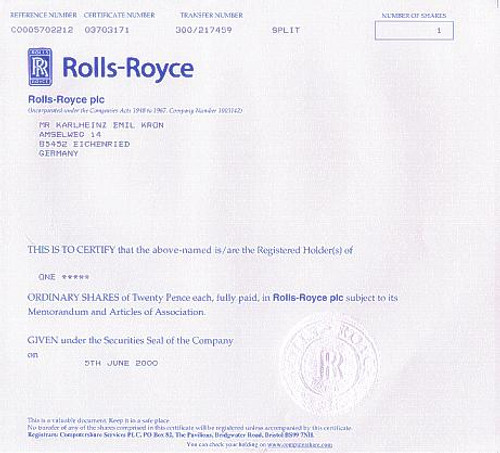 Beautifully engraved Certificate from the famous Rolls Royce Stock issued in 2000. This historic document, in its quiet elegance, has the company's name and logo with an embossed Rolls Royce Stamp. The early years The Rolls-Royce company grew from the electrical and mechanical engineering business which Henry Royce had established in 1884. Royce built his first motor car in 1904 and in May of that year met Charles Rolls, whose company sold quality cars in London. Agreement was reached at the meeting that Royce Limited would manufacture a range of cars to be sold exclusively by C S Rolls & Co: they were to bear the name Rolls-Royce. Success with the new cars led to the formation of the Rolls-Royce company in March 1906, and to the launch of the six cylinder 40/50hp 'Silver Ghost'. Within the year it was hailed by the British motoring press as "the best car in the world". From its origin until the outbreak of war in 1914 the company concentrated on the one product - the 40/50hp. Then, in response to the nation's needs, Henry Royce designed his first aero engine - the Eagle. His designs provided some half the total horsepower used in the air war by the allies and the Eagle powered the first direct transatlantic flight as well as the first from England to Australia. Between the wars new motor cars and aero engines were introduced and they were manufactured side by side in Derby. In 1931 the assets of the Bentley motor car company were acquired, and cars bearing that name have been built in parallel with Rolls-Royce models ever since. Rolls-Royce wins the Schneider Trophy The late 1920s saw Rolls-Royce develop the 'R' engine to power Britain's entry in the international Schneider Trophy seaplane contest. In the Supermarine S6 and S6B it won the Trophy outright and established a new world air speed record of over 400mph in 1931. Subsequently it established new World speed records on both land and water. More importantly, as subsequent events were to prove, it gave Rolls-Royce the technological base to develop the Merlin, which powered the Hawker Hurricane and Supermarine Spitfire in the Battle of Britain. Demand for the Merlin in the Second World War transformed Rolls-Royce from a relatively small company into a major contender in aeropropulsion. Over 160,000 engines were built by Rolls-Royce, the Ford Motor Company in Britain and Packard in the United States for Avro Lancaster bombers, de Havilland Mosquitos, North American Aviation P51 Mustangs and a dozen other operational aircraft types. The Welland engine In parallel Rolls-Royce began development of the aero gas turbine engine, pioneered by Sir Frank Whittle. The Welland engine entered Squadron service in the Gloster Meteor fighter in 1944 and a year later the Meteor established a new world speed record powered by the more powerful Derwent engine. Rolls-Royce had the confidence immediately after the war to sideline piston aero engines and commit itself to the gas turbine, in which it had a technological lead. Many countries replaced their military aircraft with jets, either purchased from Rolls-Royce or built under licence. Then, in 1953, Rolls-Royce entered the civil aviation market with the Dart propjet in the Vickers Viscount. It was to become the cornerstone of the universal acceptance of the gas turbine by the airline industry. Post-war to the present In parallel with Rolls-Royce, the major manufacturers of aero engines in Britain between the wars were Armstrong Siddeley, Blackburn, Bristol, de Havilland and Napier. Leader among these was Bristol which, in 1959, merged with the motor car and aero engine manufacturer, Armstrong Siddeley. The three other small engine companies were absorbed into Bristol Siddeley and Rolls-Royce in 1961. Finally, the total capability of the British aero engine industry was consolidated when Rolls-Royce and Bristol Siddeley merged in 1966. Among many strengths Bristol Siddeley brought to the partnership were the unique Pegasus engine which powers the Harrier jump jet and the Olympus 593, which powers Concorde, the world's only supersonic airliner. With the emergence of the new wide fuselage airliners in the late 1960s Rolls-Royce launched the RB211 for the Lockheed L1011 TriStar. Early problems with the engine led to the company being taken into State ownership, and the reflotation of the motor car business as a separate entity. Today Rolls-Royce Motor Cars Limited operates as part of Volkswagen AG. In the following years the RB211 established itself as a World class family of engines, powering the L1011, the Boeing 747, 757 and 767 and the Tupolev TU204. Rolls-Royce plc returned to the private sector in 1987, acquiring Northern Engineering Industries two years later to consolidate its capabilities in the field of industrial power. This gave Rolls-Royce a comprehensive capability in electrical, mechanical and power engineering. The company was now able to provide significant capabilities in power generation, transmission and distribution, industrial and marine power, and materials handling. In 1995 the company extended its presence in aero propulsion and small industrial gas turbines with the acquisition of the Allison Engine Company in the United States. In June 1996, Rolls-Royce announced its intention to withdraw from large steam power generation and to put two businesses up for sale; Parsons Power Generation Systems and International Combustion. Parsons was sold to Siemens, and International Combustion was sold to ABB, in 1997. In September 1998, Rolls-Royce sold its electrical transmission and distribution businesses to VATECH Elin of Austria. Today, the company is focused on its core gas turbine technology, serving the civil aerospace, defence, and energy markets.