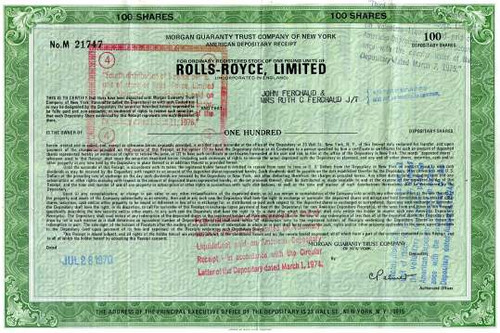 Beautifully engraved certificate from the Rolls-Royce, Limited issued in 1971. This hard to find historic document was printed by the American Banknote Company and has an ornate border around it. This item has the printed signatures of the company's authorized officer and is over 30 years old. It is now almost a century since the first auspicious meeting took place between two men who, despite quite different backgrounds and temperaments, would combine their talents to create a motor car... and a legend. Mr. Henry Royce, born in 1863, the son of a miller, was a well-established engineer (his Manchester-based firm, F. H. Royce & Co., manufactured cranes and dynamos) when in the spring of 1904 he was introduced to the Hon. Charles Rolls in Manchester. They had agreed to discuss an innovation for F. H. Royce & Co. - making motor cars that would be ahead of their time. The aristocratic Hon. Charles S. Rolls, born in 1877, the son of a landowner, was noted at the time as an entrepreneur, as well as an adventurer (in Dublin in 1903 he set a world land speed record of 93mph) and a hot-air balloonist (tragically, he was destined to be one of the earliest casualties of aviation when he died in a flying accident in 1910). Engineer Royce had focused his unquenchable enthusiasm to improve mechanical things on automobiles. He had firm views on the need for quality and a Victorian fancy for expressing his aims in stirring phrases: "Small things make perfection, but perfection is no small thing," declared Mr. Royce. "Whatever is rightly done, however humble, is noble," he added. And one of his cannier observations in this vein was to note that "The quality remains long after the price is forgotten." The Hon. Charles Rolls was hugely impressed by the precision he found in Mr. Royce's first, two-cylinder prototype. It started on the button and progressed with remarkably silent smoothness. What was more, it did not seem to break down with the regularity which was customary at the time. Charles Rolls appreciated such qualities. He was not himself a professional engineer, but he had acquired a degree in mechanical engineering at Cambridge University and was an accomplished driver. He arranged to borrow the Royce and as soon as he was back in London, rushed round to his business partner, Claude Johnson, and took him on an extended drive to show off its abilities. They were agreed that in the single-minded Mr. Royce they had found an engineering talent to take on the world. Their first stop was France, where a pioneering Royce went on show at the Paris Salon in early December, 1904. It was a sensation and, two days before Christmas, an historic agreement was signed for Messrs C. S. Rolls and Co. to have exclusive rights to sell Royce cars in Britain, on the understanding that they should henceforth be known by a new name - Rolls-Royce. Rolls-Royce was formed in 1906 for the manufacture of motor cars and quickly gained the reputation for making the best car in the world, with its Silver Ghost model. Aero engines were first produced at the outbreak of war in 1914, when Henry Royce designed the Eagle. Thereafter, motor cars, including the Bentley from 1931 onwards, were produced side by side with aero engines in the Derby factory. Launch of the costly RB211 engine for the Lockheed L1011 TriStar led to Rolls-Royce being taken into receivership by the British Government in 1971, the motor car division being floated as a separate company. The subsequent success of the RB211 and of the company's other engines in penetrating World airlines and military markets, led to Rolls-Royce being returned to the private sector in 1987. Since then Rolls-Royce has broadened its product base and presence in the industrial power market with the acquisition of Northern Engineering Industries in 1989 and Allison Engine Company in 1995. Rolls-Royce made three acquisitions in 1999: the acquisition of the rotating compressor equipment interests of Cooper Energy Services; National Airmotive Corporation; and Vickers plc.