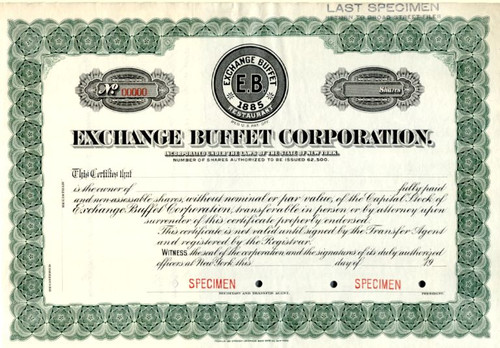 Beautifully engraved RARE specimen certificate from the Exchange Buffet Corporation printed around 1920. This historic document was printed by the Franklin Lee Division - American Banknote Company and has an ornate border around it with a vignette of the company's logo. This is the first time we have seen this certificate for sale. 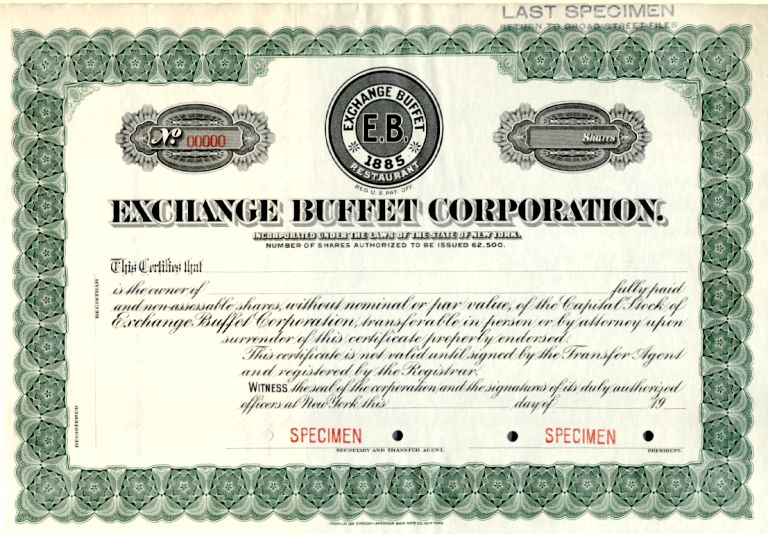 Certificate
Perhaps the first self-service restaurant (not necessarily considered a cafeteria) in the United States was the Exchange Buffet in New York City, opened September 4, 1885, which catered to an exclusively male clientele. Food was purchased at a counter, and patrons ate standing up. This represents the predecessor of two formats: the cafeteria, and the automat. The first Exchange Buffet ("E & B") restaurant opened in 1885 on New Street, near the New York Stock Exchange. The restaurants operated on the honor system--patrons took food from the buffet tables, then told the cashier what they had taken. Often credited as the being first cafeteria restaurant, the Exchange Buffet, founded in 1885, was still around in 1946. They were popular during the War with servicemen working in downtown military offices as well as college students and office clerks. In some cases, patrons were third or fourth generation customers. The first one was across from the Stock Exchange and served only men. The customer picked up whatever he wanted at the buffet, then took his meal to a high-top counter and ate it standing up. On the way out, he told the cashier what he had ordered and paid his bill. By 1946 there were more than a dozen Exchange Buffets in the city. Now women were welcome and there were tables as well as stand-up counters, but it still operated on the honor system. Men made up majority of the patronage. Wags said the E and B in the company logo stood for "eat 'em and beat 'em" since it was easy to cheat the place out of payment. You could pick up a full lunch and then tell the cashier that you only had a slice of pie and coffee. Pie and coffee seems to have been a common lunch choice in the early decades of the twentieth century. If you ran this scam, you risked the public embarrassment of being loudly challenged at the register. The cashier sometimes took on the tone of a prosecuting attorney and, according to some recollections, an undercover employee kept an eye on suspicious patrons. Most customers were honest. Sometimes patrons lied when they were down to their last few coins but made up for it when their pockets were full. The management felt that whatever was lost to dishonest customers was made up by increased speed and efficiency. The restaurant industry referred to these places as "grab joints." They appealed from the start to Wall Street clerks who could only take a short break before returning to the stock ticker. And it was cheap. Even future wheeler dealers ate here at the beginning of their careers. The concept was quickly copied by other establishments but almost all dropped the honor system. The usual routine at other cafeterias in 1946 was to pick up a ticket when you entered the establishment. The servers would punch the amount of each item when you ordered and then you turned in the ticket to the cashier as you left and paid the total. Some people still found ways around this. I don't know how many Exchange Buffets were in operation in 1946.There were ones on West 35th Street near the Empire State Building, at 42nd Street, on 18th Street near Fourth Avenue and on Murray Street near City Hall. In 1916 there were 25, according to William Grimes in Appetite City. The count was down to 15, according to story in The New York Times, in 1954 when employees went on strike. In 1947 the company was doing well enough to take a controlling interest in a new corporation formed to buy the nine Longchamps, an upscale restaurant chain whose previous owners were serving time for tax evasion. At this time, the new owners also brought Longchamps in compliance wih the state anti-discrimination law. Under its previous owners, Longchamps would not hire African Americans waiters. In 1963 the company declared bankruptcy. By then it had sold off Longchamps. The last of its honor system cafeterias closed in October at 41 East 42nd street where it was located below street level in a subway arcade. It still was operating four cafeterias in the city under the Shoreham name, but these were not run on the honor system. According to the company obituary in The New York Times, abuse of the honor system had contributed to the company's financial woes. History from Wikipedia, Blogspot, Encyberpedia and OldCompany.com (old stock certificate research service) About Specimen Certificates Specimen Certificates are actual certificates that have never been issued. They were usually kept by the printers in their permanent archives as their only example of a particular certificate. Sometimes you will see a hand stamp on the certificate that says "Do not remove from file". Specimens were also used to show prospective clients different types of certificate designs that were available. Specimen certificates are usually much scarcer than issued certificates. In fact, many times they are the only way to get a certificate for a particular company because the issued certificates were redeemed and destroyed. In a few instances, Specimen certificates were made for a company but were never used because a different design was chosen by the company. These certificates are normally stamped "Specimen" or they have small holes spelling the word specimen. Most of the time they don't have a serial number, or they have a serial number of 00000.