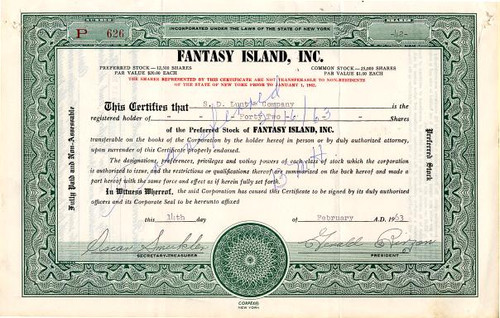 Beautiful certificate from the Fantasy Island, Inc issued in 1963. This historic document was printed by Corpex Company and has an ornate border around it. This item has the signatures of the Company's President, Gerald Biozon and Secretary, Oscar Smuckler and is over 45 years old. Fantasy Island is an amusement park located in Grand Island, New York. 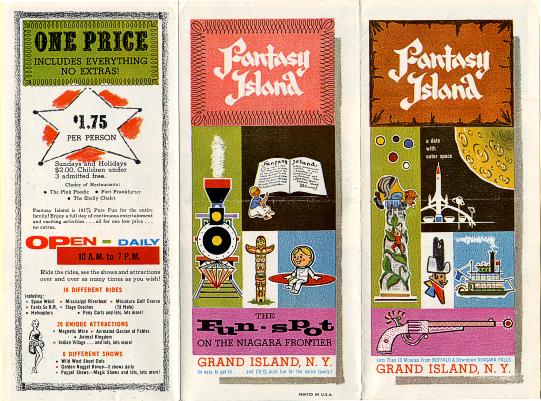 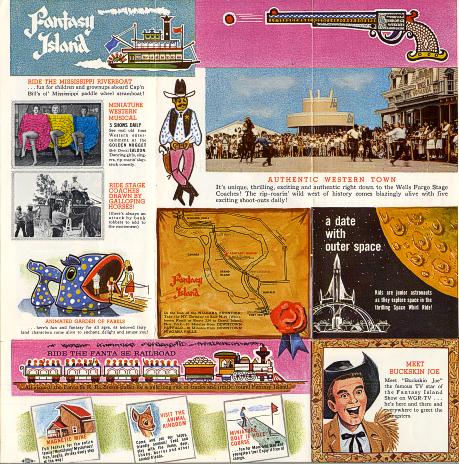 Old Brochure shown for illustrative purposes
Fantasy Island, Inc. opened on July 1, 1961 and went bankrupt in 1982. It was acquired out of bankruptcy by Charles Wood, the original owner of Storytown USA. He sold the park to International Broadcasting Corporation (IBC) in 1989, and later reacquired the park in 1992 when IBC went bankrupt. Wood changed the park's name to Two Flags Over Niagara Fun Park, a name it kept until 1994 when local businessman Martin Dipietro purchased the park and redubbed it Martin's Fantasy Island. Originally the park only occupied 12 acres of land. It expanded to 85 acres in 1974. The park's Silver Comet roller coaster, introduced in 1999, was created in the spirit of the original Comet roller coaster that was located at nearby Crystal Beach, Ontario for many years. In fact, the original Comet was stored at Fantasy Island after Charles Wood purchased it in 1989. Wood would later move the Comet to his Great Escape park in Lake George, New York, where it was reassembled in 1994 and remains in operation to this day. It is the one and only amusement park on Grand Island. History from Wikipedia and OldCompanyResearch.com (old stock certificate research service).