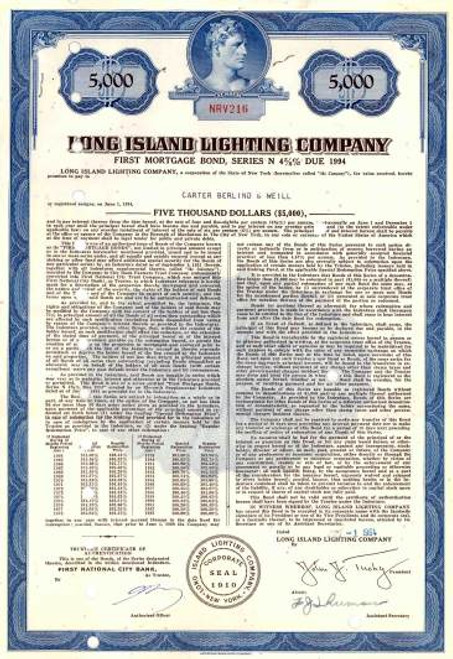 Beautifully engraved certificate from the Long Island Lighting Company issued in 1964. This historic document was printed by the American Banknote Company and has an ornate border around it with a vignette of an allegorical man's head. This item has the printed signatures of the Company's President and Assistant Secretary and is over 45 years old. 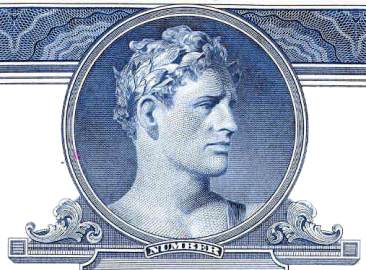 Certificate Vignette
The Long Island Power Authority (LIPA) is a corporate municipal instrumentality of the State of New York and was created by State legislation enacted in 1986. LIPA was established to resolve the controversy over the Shoreham Nuclear Power Plant (Shoreham) and to seek lower utility rates on Long Island. The Long Island Power Authority was authorized under its enabling statute to acquire all or any part of the securities or assets of the Long Island Lighting Company (LILCO) on a negotiated or unilateral basis and to issue lower cost, tax-exempt debt to finance such acquisition. Prior to any such acquisition, LIPA was required to determine that the rates for a reasonable period of time after the acquisition would be no higher than the rates would have been if LILCO's securities or assets had not been acquired. LIPA is authorized to fix its own rates and charges for utility services. In February of 1992, title to Shoreham as well as Shoreham's Nuclear Regulatory Commission (NRC) "possession-only license" were transferred from LILCO to the Long Island Power Authority, and decommissioning of the plant began in July of 1992. By October of 1994, LIPA had completed the physical decommissioning of Shoreham, under budget and ahead of schedule, and submitted to the NRC its final report seeking termination of Shoreham's NRC license and release of the site for unrestricted use. The NRC officially terminated the Shoreham license on May 2, 1995. In February 1996, the Long Island Power Authority Board authorized the commencement of negotiations with LILCO to acquire the company's securities or assets as a means of substantially lowering electric rates on Long Island. In June 1997, the LIPA Board approved Definitive Agreements between LIPA and LILCO, subject to various State and Federal regulatory approvals and other conditions. The Definitive Agreements provided that the Long Island Power Authority would acquire the stock of LILCO for slightly less than its book value (after LILCO has transferred its on-Island generation and gas system to subsidiaries of a new LILCO/Brooklyn Union holding company). LIPA would thereby acquire LILCO's transmission and distribution system, its interest in the Nine Mile Point 2 plant and its Shoreham regulatory asset, and would be responsible for serving electric customers in the LIPA service area. The acquisition was completed on May 28, 1998. On May 29th, LIPA was Long Island's new electric company. LIPA's acquisition of LILCO resulted in immediate rate reductions of 20.9 percent in Nassau County and the Rockaways and 19.1 percent for Suffolk County. Residents of Nassau County and the Rockaways also received a one-time check of $232 soon after the completion of the acquisition and Suffolk County residents received a check for $101. Prior to acquiring LILCO's securities or assets, the Long Island Power Authority was required to obtain the unanimous approval of the three voting members of the State Public Authorities Control Board (PACB). One of the voting members of the PACB is designated by the Governor, George Pataki. The other two voting members are appointed by the Governor upon the recommendations of the State Senate Majority Leader, Joseph Bruno, and the Speaker of the State Assembly, Sheldon Silver, respectively. On July 16, 1997 the PACB unanimously approved the LIPA transaction subject to certain conditions. The LIPA Board has indicated its acceptance of those conditions. The PACB also reviewed and voted upon LIPA's financing plan prior to completion of the transaction. LIPA is governed by a 15-member Board of Trustees. Nine of the Trustees are appointed by Governor Pataki, three of the Trustees are appointed by Senate Majority Leader Bruno, and three of the Trustees are appointed by Assembly Speaker Silver.