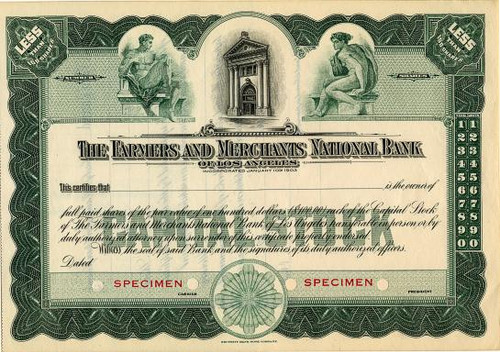 Beautiful engraved RARE specimen certificate from the Farmers and Merchants National Bank of Los Angeles . This historic document was printed by Security Bank Note Company and has an ornate border around it with a vignette of the company's classic bank building flanked by two allegorical men. The bank was incorporated in 1903. This is the first time we have had this for sale.

Certificate Vignette
Farmers and Merchants Bank is a historic lending institution in downtown Los Angeles, California, USA, known both for its architecture and its pivotal role in the economic development of early Los Angeles. Other, non-related "F&M Banks" exist in many cities and towns across the United States. The Farmers and Merchants Bank was the first incorporated bank in Los Angeles, founded in 1871 by Isaias W. Hellman, a successful merchant, real estate speculator and banker, and brother of Hermann W. Hellman. Isaias was to remain president of the bank till his death in 1920. Designed in the Classical Revival style, the Farmers and Merchants Bank remains one of Southern California's finest examples of the early "temples of finance" which were popular at the turn of the century. Its two-story facade, reminiscent of a Roman temple, is punctuated by an entrance framed with Corinthian columns topped by a large triangular pediment. Built in 1905, the bank was designed by the firm of Morgan and Walls. The Farmer's and Merchants Bank was founded by 23 prominent Los Angeles businessmen, with an initial capital of $500,000. The three largest subscribers were Isaias W. Hellman ($100,000), former California Governor John G. Downey ($100,000), and Ozro W. Childs ($50,000) who in later years became the founders of the University of Southern California. Other investors included Charles Ducommon ($25,000), I.M. Hellman ($20,000) and Jose Mascarel ($10,000.) I.W. Hellman, the bank's first president, was a cautious lender, insisting that major borrowers have good character and provide good security. Its subsequent presidents, J.A. Graves (who had been Hellman's attorney) and Victor H. Rosetti, continued Hellman's conservative practices, with a large portion of the bank's capital constantly held in Treasury securities. As a result, the Bank survived every panic, from 1873 through the Great Depression. However, a one-branch downtown bank was eventually seen as not likely to continue to grow. In 1956, it merged with Security First National Bank, which became in later years Security Pacific National Bank, and ultimately was acquired by the Bank of America. The Farmers & Merchants Bank building has been established as Los Angeles Historic-Cultural Monument #271. Much of the original banking room remains, including light fixtures, a central skylight, and the loggia with its Victorian-style railings. Operating as a bank until its closure in the late 80s, the building now functions primarily a as a special events and banquet facility, and film location. The building is slated for renovation by developer Tom Gilmore and Associates. About Specimens Specimen Certificates are actual certificates that have never been issued. They were usually kept by the printers in their permanent archives as their only example of a particular certificate. Sometimes you will see a hand stamp on the certificate that says "Do not remove from file". Specimens were also used to show prospective clients different types of certificate designs that were available. Specimen certificates are usually much scarcer than issued certificates. In fact, many times they are the only way to get a certificate for a particular company because the issued certificates were redeemed and destroyed. In a few instances, Specimen certificates we made for a company but were never used because a different design was chosen by the company. These certificates are normally stamped "Specimen" or they have small holes spelling the word specimen. Most of the time they don't have a serial number, or they have a serial number of 00000. This is an exciting sector of the hobby that grown in popularity over the past several years.