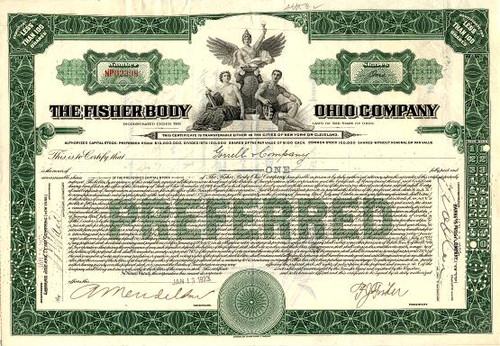 Beautifully engraved SCARCE certificate from the Fisher Body Ohio Company no later than 1923. This historic document was printed by American Bank Note Company and has an ornate border around it with a vignette of an three allegorical figures. This item has the signatures of the Company's President, F.J. Fisher and Secretary, A Mendelson and is over 99 years old. 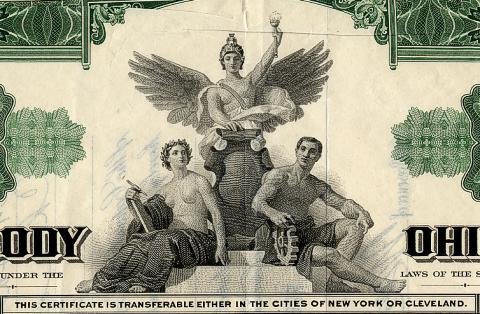 Fisher Body was an automobile coachbuilder now part of General Motors. The company was founded on July 22, 1908 by Albert, Fred, and Charles Fisher of Detroit, Michigan. Their company became one of the top coachbuilders in the United States, building their signature factory, Fisher Body 21, in 1919. At the time, the company had more than 40 buildings housing 3,700,000 square feet (344,000 m²) of floor space. Prior to forming the company, Fred Fisher had built the body of the Cadillac Osceola at the Wilson Body Company. Starting in 1910, Fisher became the supplier of all closed bodies for Cadillac, and also built for Buick. General Motors bought 60% of the company in 1919 before integrating it entirely as an in-house coachbuilding division in 1926. Fisher purchased Fleetwood Metal Body in 1925. It was split from Ternstedt and recombined in 1968. Fisher was dissolved by being merged with other GM operations in 1984. By 1913, the Fisher Body Company had the capacity to produce 100,000 cars per year and customers included: Ford, Krit, Chalmers, Cadillac, and Studebaker. Part of the reason for their success was the development of interchangeable wooden body parts that did not have to be hand-fitted, as was the case in the construction of carriages. This required the design of new precision woodworking tools. In 1916 the Company became the Fisher Body Corporation. Its capacity was now 370,000 bodies per year and its customers included Abbot, Buick, Cadillac, Chalmers, Chandler, Chevrolet, Churchfield, Elmore, EMF, Ford, Herreshoff, Hudson, Krit, Oldsmobile, Packard, Regal, and Studebaker.