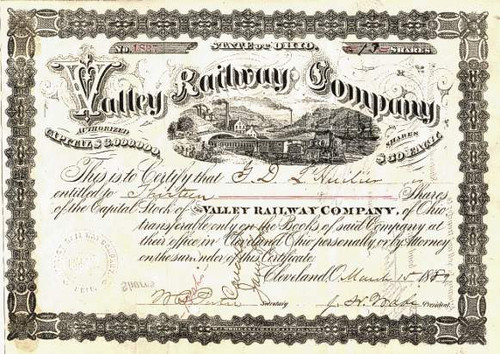 Beautifully engraved certificate from Valley Railway Company issued in 1889. This historic document has an ornate border around it with a vignette of a train. This item is hand signed by the Company's President, J. H. Wade and Secretary, W. B. Porter and is over 117 years old. 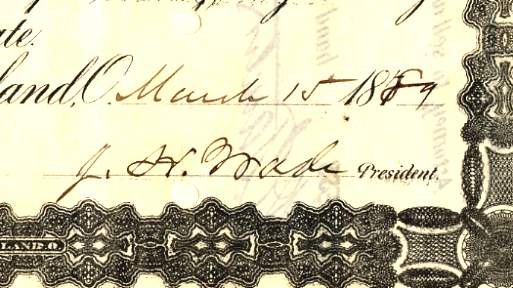 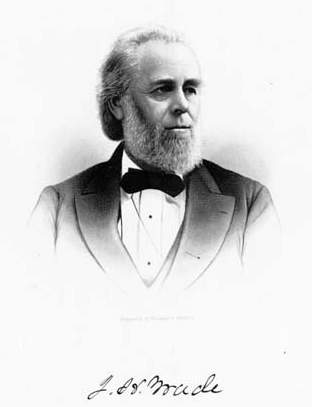 Picture of Jeptha Homer Wade
VALLEY RAILWAY COMPANY, Main Line of Road.--Cleveland, 0., to Valley Junction, 0 75.50 Kranzroy : Kruwroy to Cottage Grove 5.00 Branches : Willow: Willow to Newburg 3 33 Other Short Coal Branches 9.67-93.50 miles. Sidings, etc., 38.8 miles. Gauge, 4 ft. 84 in. Rail (steel, 70 miles), 56 lbs. History -- Organized August 21, 1871 ; road opened to Canton February 1, 1880 ; to Mineral Point, July 15, 1882 ; to Valley Junction, January 1, 1883. Rolling Stock.--Locomotive engines, 21. Cars--passenger, 21; baggage, mail and express, 4 ; freight (box, 58 ; stock, 2 ; platform, 104 ; coal, 720), 884 ; caboose, 4 ; other cars, 19--total, 932. Of the above the following were acquired by car trust : Locomotive engines, 11. Cars--passenger, 11; baggage, mail and express, 1 ; freight (box, 4 ; stock, 2 ; platform, 100 ; coal, 420), 526 ; caboose, 4 ; service, 11--total, 558. Operations for year ending December 31, 1888.--Train mileage--passenger, 200,688; freight, 229,973; mixed, 457,726; other, 24,273--total, 912,360 miles. Passengers carried, 289,609 ; carried one mile, 6,576,959 ; average mile rate, 2.03 cents. Tons freight moved, 1,101,868 ; moved one mile, 38,649,905 ; average ton-mile rate, 1.34 cents. Trustee, Central Trust Co., New York. Annual meeting, third Wednesday in April. Books close 30 days prior to annual meeting, and stock owned then may be voted. Interest payable in New York, at the office of Drexel, Morgan & Co. The secretary is registrar of stock. Consolidated mortgage bonds are listed on New York Stock Exchange. The Valley Railway Company was incorporated on August 21, 1871 to build a line from Cleveland to reach the coal fields in southeastern Ohio. Construction began in 1873, but was suspended during the financial 'Panic' of 1874. Construction was resumed in 1878 and the 75-mile line was completed in 1882. It went south from Cleveland through Akron to Valley Junction, Ohio. In January, 1890, the Baltimore & Ohio Railroad Company acquired control of the company. At the same time the Baltimore & Ohio Railroad Company had purchased properties along the Cuyahoga River in downtown Cleveland to develop terminal facilities, including both passenger and freight stations. The ornate passenger station was opened in 1898. A Baltimore & Ohio Railroad Company subsidiary, the Cleveland Terminal & Valley Railroad Company, was incorporated in 1895 and it acquired the B&O terminal properties and the Valley Railway Company. The Baltimore & Ohio Railroad Company assumed operation of the Cleveland Terminal & Valley Railroad Company in June 1909 but did not absorb the line until 1915. Later, in 1934, the Baltimore & Ohio Railroad Company transferred its passenger trains to the new (built 1931) Cleveland Union Terminal, located northeast of the Baltimore & Ohio Railroad Company terminal. History from the Baltimore & Ohio Railroad Historical Society. Jeptha Homer Wade (August 11, 1811-August 9, 1890) was an American industrialist, philanthropist, and founder of Western Union Telegraph. Born in New York state, Jeptha Wade was a Cleveland, Ohio industrialist who was responsible for the consolidation of most of the telegraph industry by forming Western Union through a series of acquisitions and mergers. By 1847, he became interested in the telegraph industry and worked as a sub-contractor. He constructed a telegraph line between Detroit and Jackson, Michigan, part of the Buffalo and Milwaukee Telegraph Company and the first line in operation west of Buffalo, New York. He moved to Milan, Ohio in 1849, where he established a telegraph office, organized the Cleveland Cincinnati Telegraph Company, and utilized the Morse telegraph system. Wade soon became an agent for the Morse system with an office in Columbus, Ohio, where he lived after 1850. Subsequently, Wade built telegraph lines through the midwest and west. He developed a network of telegraph lines known as "Wade lines" that stretched from St. Louis to San Francisco. In 1857 he moved to Cleveland where he was a director of several railroad companies and an incorporator of banks and business enterprises. In 1861, Jeptha Wade joined forces with Benjamin Franklin Ficklin and Hiram Sibley to form the Pacific Telegraph Company. With it, the final link between the east and west coast of the United States of America was made by telegraph. In 1866, he served as president of the Western Union Telegraph but after one year resigned for reasons of health. Wade used his vast wealth to benefit his community of Cleveland, Ohio. In 1882, Wade donated 72 acres (291,000 m²) of land east of the city for purpose of creating a park, which was named Wade Park in his honor. Wade also was heavily involved with the formations and establishment of Hathaway Brown School, a private academy for young girls and women; he also co-founded the Case School of Applied Technology, now part of Case Western Reserve University. In addition, Wade served as the first President of the Board of Trustees for Lakeview Cemetery on Cleveland's east side. Mr. Wade also served as vice president or director of a number of public institutions such as the Workhouse and House of Refuge, the Homeopathic Hospital, and the Cleveland Protestant Orphan Asylum. Jeptha Wade was instrumental in the founding of Case Institute of Applied Science in 1880. In 1881 Wade gave the City of Cleveland seventy-five acres of land near East 107th Street and Euclid Avenue for a public park. In 1882, it was deeded to the city. Jeptha Wade I died in 1890. He had accumulated great wealth through his work with the telegraph and railroad industries. His philanthropic philosophy was adopted and practiced by his son Randall (who died 14 years before his father); and in turn by Randall's son Jeptha H. Wade II (J.H. Wade) II History from Wikipedia.