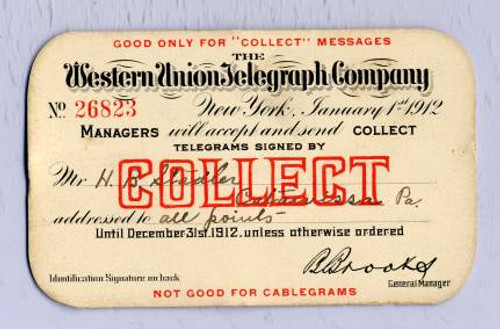 Western Union Telegraph Company Identification Card for Collect Telegrams. this card enable the holder to send and accept collect telegrams. All original, is in excellent condition. About 4 x 2.5 inch paper card The Western Union Company is a financial services and communications company based in the United States. Its North American headquarters is in Meridian, Colorado, though the postal designation of nearby Englewood is used in its mailing address. Up until it discontinued the service in 2006, Western Union was the best-known U.S. company in the business of exchanging telegrams. Western Union has several divisions, with products such as person-to-person money transfer, money orders, business payments and commercial services. They offered standard "Cablegrams", as well as more cheerful products such as Candygrams, Dollygrams, and Melodygrams. Western Union, as an industrialized monopoly, dominated the telegraph industry in the late 19th century. It was the first communications empire and set a pattern for American-style communications businesses as they are known today.