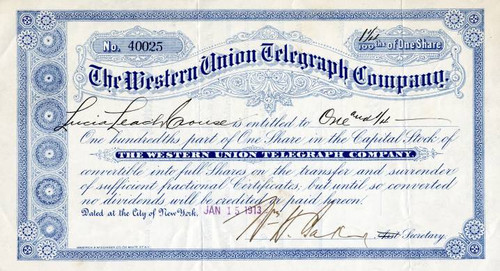 Beautiful certificate from the The Western Union Telegraph Company issued in 1913. This historic document was printed by the Maverick & Wissinger Company and has an ornate border around it. This item has the hand signature of the Company's Secretary, and is over 101 years old. 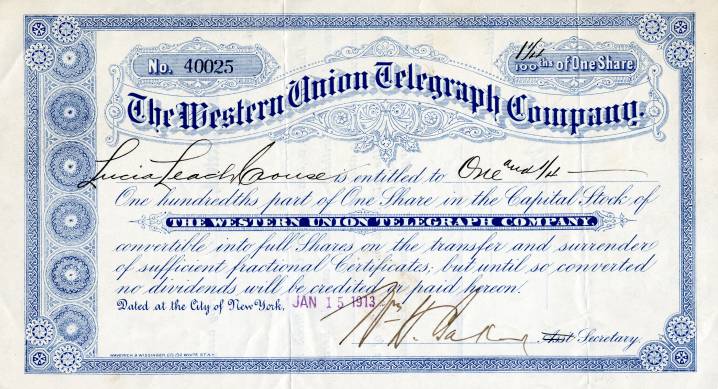 Certificate
Western Union Telegraph Company, enterprise created (1851) to provide telegraphic communications services in the United States. Originally known as the New York and Mississippi Valley Printing Telegraph Company, Western Union (as it was renamed in 1856 after a series of acquisitions) built the nation's first transcontinental telegraph line in 1861. The company briefly entered the telephone field but, after losing a court battle with Bell Telephone in 1879, turned completely to telegraph communications. Western Union's telegraph business grew rapidly, reaching its height (more than 200 million telegrams) in 1929. By 1943, after acquiring Postal Telegraph and some 500 other competitors, Western Union was easily the largest company in its field. During the 1960s, faced with steeply declining telegraph revenues and rising costs, the company moved into a number of other related services, such as time-sharing computer systems, teleprinters, and satellite communications. The Western Union Corp., formed in the 1970s, eventually sold off its communications businesses and emerged in the early 1990s as the New Valley Corp., a banking services and real estate company. Another part of the original company, Western Union Financial Services, became a subsidiary of First Data Corp. in 1995 and now specializes in electronic money transfers and business communications services; it continued to transmit telegrams until 2006. History from Wikipedia, Encyberpedia and OldCompany.com (old stock certificate research service)