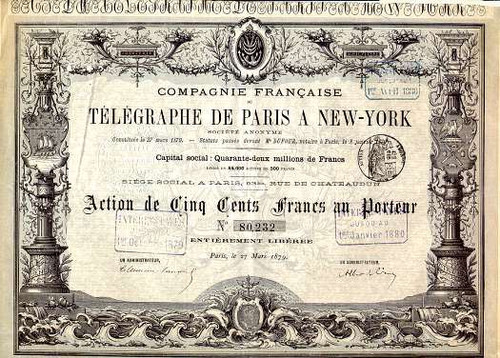 Beautifully engraved Certificate from the Compagnie Francaise du Telegraphe de Paris a New York issued in 1879. The company was responsible for building the Trans-Atlantic Submarine Cable from Paris to New York. This historic and unique document has an ornately detailed border around it surrounding the company name and the certificates description. This early telegraph item is signed by the company's administrators and is over 121 years old. The first cable laid beneath the Atlantic ocean was completed in 1858. The Queen of England and the President of the United States immediately exchanged greetings. Modern civilizations were astounded that there were instantaneous communications between Europe and North America. Unfortunately, the cable failed after only three weeks. 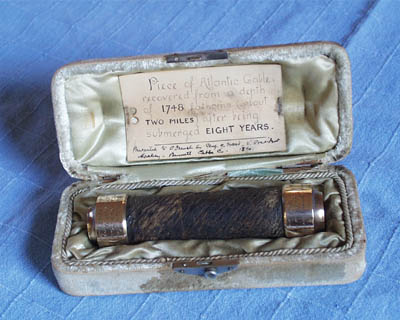 Piece of Cable Laid by Compagnie Francaise du Telegraphe de Paris
The item in the photo above is a boxed commemorative piece (owned by Neal McEwen) of an early Atlantic Cable. The paper label inside the lid of the box states: "Piece of Atlantic Cable recovered from a depth of 1748 fathoms (about two miles) after being submerged eight years". This section of cable was presented to O. French by George G. Ward, Vice President of Mackay Burrnett Cable Co. 1890. The box is silk covered and silk lined, though a little water stained The cable specimen is 5 inches long and has a diameter of 1 1/8". Its cover is tar impregnated twine, then called 'jute.' Under the jute are 18 steel wires, a layer of insulation and a multi-strand copper core consisting of an central wire and 10 thinner wires wrapped around it. Each end of the cable piece has an engraved decorative brass cap. The engraving reads as follows: Top Cap: "Compagnie Francaise du Telegraphe de Paris a New York Cable No. 8105" Bottom Cap: "Seimens Brothers & Co. London Submerged 3rd September 1879 No. Longitude 43 N 24 W Depth 1748 Fathoms". This was the company from which this stock certificate was issued. Early cables were limited in the speed of transmission because of the 'retardation' effect to only a few words per minute. By the 1920s, advances in cable technology permitted automated transmission and reception with speeds of several hundred words per minute. Transoceanic telegraph cables inaugurated rapid communications among the world's financial centers, instantly arranging shipments of cargo and relaying World commodity prices. Laying of a transatlantic cable takes 6 dramatic attempts between 1857 to 1866. American Cyrus Field is the driving force behind the continued attempts mostly with British backing. By 1892 there are 10 transoceanic telegraph links. At $5 a word, 17 words per min, and revenue of $2 million per year, the transoceanice business was very profitable for most companies. By 1930 there are 350,000 miles of telegraph lines globally. The Compagnie Francaise Telegraphe de Paris a New York combined with Compagnie FranÃ§aise des CÃ¢bles TÃ©lÃ©graphiques (Compagnie Francaise des Cables Telegraphiques ) in 1894.