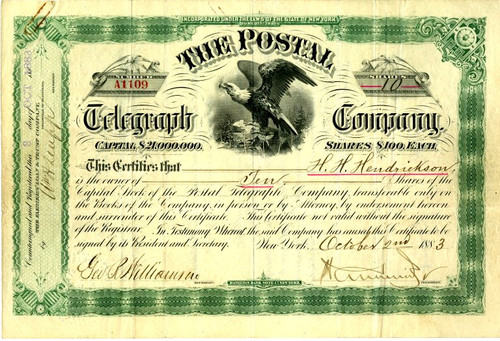 Beautifully engraved SCARCE certificate from the Postal Telegraph and Cable Company issued in 1883. This historic document was printed by Hamilton Bank Note Company and has an ornate border around it with a vignette of an eagle perched on a rock above telegraph cables. This item is hand signed by the Company's V. President and Secretary and is over 136 years old. The certificate was issue to H. H. Hendrickson and endorsed by him on the verso. Paperclip mark on top. 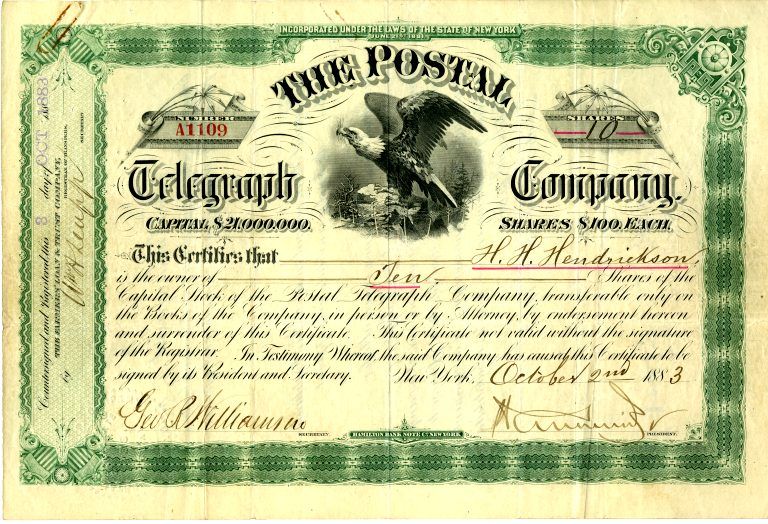 Certificate
Postal Telegraph Company (Postal Telegraph & Cable Corporation) was a major operator of telegraph networks in the United States prior to its consolidation with Western Union in 1943. Postal partnered with Commercial Cable Company for overseas cable messaging. Postal was founded in the decade of the 1880s by John William Mackay, an entrepreneur who had made a fortune in silver mining in the Comstock Lode. Mackay's original purpose was to provide a domestic wire network to directly link with the Atlantic Cable. Mackay built the Postal network by the purchase of existing firms that were insolvent. The company was initially called The Pacific Postal Telegraph Cable Co. Under president Albert Brown Chandler, the Postal network was able to achieve sufficient economy of scale to compete with Western Union, occasionally controlling as much as 20% of the business. By 1893, the company's rate of growth had allowed it to become the only viable competitor to Western Union. It had grown so large, that management had to move out of the company's New York City headquarters to make room for more operations staff. Chandler oversaw the design and construction of a new headquarters at Broadway and Murray Street. In the 1880s, the Postal Telegraph Company was headed by John Mackay, who had made a fortune at the Comstock Lode. Mackay did what many of his telegraph predecessors did in the 1850s, he created a network by buying out existing bankrupt firms and merging them into a network with large enough economies of scale to complete with Western Union. Postal Telegraph never challenged Western Union's market dominance, but it did control over 10-20% of the market at various times.