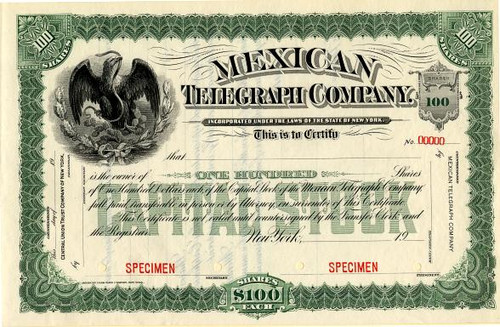 Beautiful engraved specimen certificate from the Mexican Telegraph Company dated 19__. This historic document was printed by American Bank Note Company and has an ornate border around it with a vignette of Mexico Coat of Arms. 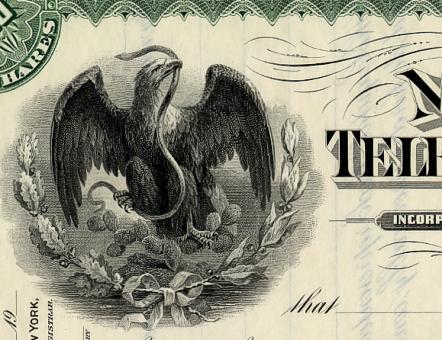 Certificate Vignette
In 1880, the MEXICAN TELEGRAPH COMPANY was formed by a body of American capitalists, and in the following year the CENTRAL AND SOLUTH AMERICAN TELEGRAPH COMPANY was floated by similar hands. The object of these two schemes was to bring Mexico and the West Coast of South and Central America into direct communication with the United States (independent of the West Indian lines), thus also diverting through the States part of the aforesaid traffic with Europe. The cables across the Gulf of Mexico were laid between 1880 and 1882, and those for the Central and South American Company, along the West Coast, in 1882. The latter started from Peru, at the spot where the system of the West Coast of America Company ended; touching at Panama and various points of communication with other systems, they extended to the Gulf of Tehuantepec. By means of a land line across the isthmus of the $.14-rte name, and a short cable on the other side, they there met with the Mexican Company's cables at Vera Cruz. The Silvertown Company were the contractors for the manufacture and submersion of all these cables,· those on the ieVst Coast comprising eight sections, and having a total length of 3.200 N. M. The Central and South American Company have within recent years (1891) extended their system to Valparaiso, and thence by land tine to Santiago, thus entering into competition with the West Coast of America Company. They purchased at the same time the Transandine Telegraph Company's land line from Valparaiso and Santiago to Buenos Ayres (with its four intermediate stations), thus securing an independent connection of their own with the great Argentine and Uruguayan capitals, Buenos Ayres and Montevideo. By other land lines through Brazil they also reach Rio. This (Central and South American) company's connection with Europe is, however, as previously mentioned, exclusively hy way of the Mexican Company's system, the Western Union land lines, and the Atlantic cables to England and France. MEXICAN TELEGRAPH COMPANY Captain James Scrymser left the International Ocean Telegraph Company to set up two further telegraph companies, one being the Mexican Telegraph Company, the intention being to link the USA and Mexico by submarine cable. Up until this time links between the two countries were by land line. The India Rubber, Gutta Percha and Telegraph Works Company were contracted to lay the 738 nm of cable between Galveston, Texas and Vera Cruz, Mexico, with a landing at Tampico, the work being carried out in 1881 using CS Dacia and CS International. A second cable was laid in 1882 this time from Galveston to Coatzacoalcos and then to Vera Cruz. The India Rubber Co manufactured the cable and used CS Dacia to lay it. The Coatzacoalcos to Vera Cruz cable belonged to the Central and South American Telegraph Company, Scrymser's second company. Two further cables were laid, in 1895 and 1905, both from Galveston to Coatzacoalcos. Siemens Brothers manufactured both cables and used CS Faraday to lay them. Up until 1890 repair work was carried out by chartering cable ships from other companies. In 1890 the Central and South American purchased CS Relay and this vessel was used to maintain the cables of both companies until the Mexican acquired its own cable repair ship in 1893. In 1927 the Mexican was taken over by the Western Union and the cables were eventually abandoned. History from Wikipedia and OldCompanyResearch.com. About Specimens Specimen Certificates are actual certificates that have never been issued. They were usually kept by the printers in their permanent archives as their only example of a particular certificate. Sometimes you will see a hand stamp on the certificate that says "Do not remove from file". Specimens were also used to show prospective clients different types of certificate designs that were available. Specimen certificates are usually much scarcer than issued certificates. In fact, many times they are the only way to get a certificate for a particular company because the issued certificates were redeemed and destroyed. In a few instances, Specimen certificates we made for a company but were never used because a different design was chosen by the company. These certificates are normally stamped "Specimen" or they have small holes spelling the word specimen. Most of the time they don't have a serial number, or they have a serial number of 00000. This is an exciting sector of the hobby that grown in popularity over the past several years.