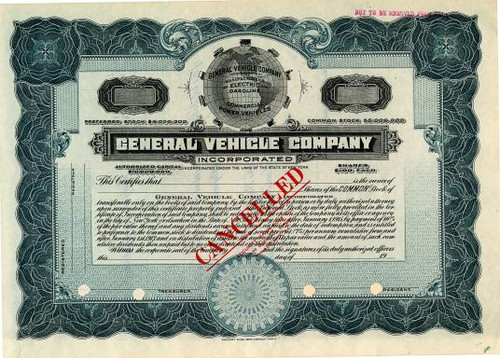 Beautiful engraved RARE specimen certificate from the General Vehicle Company dated in 1913. This historic document was printed by Security Bank Note Company and has an ornate border around it with a vignette of a very small odd fashioned trucks circling a small globe with the words "Manufacturers of Electric and Gasoline Commercial Power Vehicles". This item is over 94 years old. Rare, possibly unique. 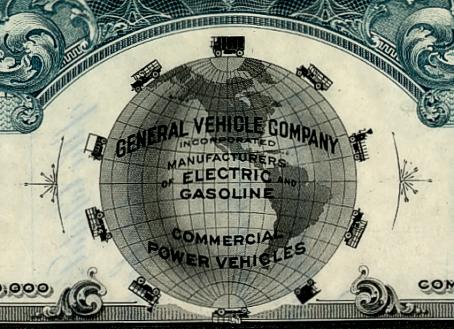 Certificate Vignette
General Vehicle Company of Long Island City operated from 1906 to 1920. The PEERLESS MOTOR CAR CO., noted for its luxury automobiles, was established in Cleveland in 1889 as the Peerless Wringer & Mfg. Co., located on the city's east side at the junction of the Cleveland & Pittsburgh and the New York, Chicago & St. Louis railroads. By 1892 it had become the Peerless Mfg. Co. Originally a producer of washing-machine wringers, Peerless moved to 2654 Lisbon St. in 1895 and began making bicycles in the late 1890s. The company was manufacturing automobiles and parts in 1901 and was renamed the Peerless Motor Car Co. 2 years later. The company's factory was built in 1906 at 9400 Quincy Ave. This 1932 Peerless, with a complete aluminum body and engine, was one of only 3 built by the Peerless Motor Car Co. Peerless employed Louis P. Mooers in 1902. He designed the first completely original Peerless and began entering his designs in automobile races with some success until he left in 1906. The company was known for its luxurious touring car models, priced at $3,200, $4,000, and $6,000 in 1905. In 1915 Peerless merged with the General Vehicle Co. of New York and the Cleveland concern became a subsidiary of the resulting Peerless Truck & Motor Co. When it became clear in the 1920s that the market for the large touring cars was limited, the company lowered its prices and tried to promote medium-sized cars. Although President James A. Bohannon tried to save the firm, Peerless was unable to survive the Depression and the last Cleveland-based company to build automobiles in the city closed in 1931. After a careful study of the Depression-era market, Bohannon organized the Carling Brewing Co. in 1933 and operated it in the old Peerless factory. VEC - Vehicle Equipment Co. - 1901-1905 - Brooklyn, New York - 1905-1906 - Long Island City, New York (later General Vehicle Co. 1906-1917) This was one of the most important early builders of electric vehicles in America, making many of the sightseeing 'rubberneck' buses which plied in New York, Washington and other cities. Other products included ambulances, brewery trucks, tipping coal trucks and special vehicles for lifting safes to the upper stories of office buildings, handling' machinery and withdrawing telephone cables from underground conduits. In 1906 the name was changed to General Vehicle Company, and the products to G.V. The Vehicle Equipment Co. of Long Island City NY produced a large number of commercial-purpose electric vehicles (e.g. delivery trucks) from 1901 to 1906. They produced a 3-seater electric car, the V.E. Electric, from 1903 to 1905. Most, if not all, vehicles were shaft-drive. Vehicle types produced included broughams, victorias, hansoms, landaulets, and commercial vehicles include trucks and sightseeing buses. The factory burned in 1904, and was rebuilt. The company went into receivership in 1906, and was resurrected after reorganization as the General Vehicle Company. General Vehicle Company 1906-1917 Long Island City, N. Y. (Subsidiary of the General Electric Company) Known electric vehicle builder (GV Electric) who also built buses and funeral vehicles in the early part of the 20th century. Day Baker of General Vehicle Co. Will Discuss Electric Vehicles at MIT Union. (1914) The next Electrical Engineering Society meeting will be held next Friday evening in the Union. The speaker will be Mr. Day Baker, the New England superintendent of the General Vehicle Company. As an appropriate subject for the occasion, Mr. Baker will discuss Electric Vehicles. In the first two decades of the 20th century, Long Island City was a hub of industrial activity, and the news that the government had taken over two of its largest plants was greeted with interest. The Stewart-Warner Speedometer Company on Jackson Avenue and the General Vehicle Company on Borden Avenue were to be used to manufacture materials needed for war supplies and it was anticipated that other plants would follow. (1917 article) IN 1914 The French-designed Gnome rotary engine was built under license by the General Vehicle Company in Long Island City, New York, and was used in Cole Palen's first Fokker triplane until a cylinder departed the engine in mid-flight. The US Army purchased a number of Peerless trucks. They were well liked by the Army. When WW1 broke out, England purchased 12,000 Peerless Truck Chassis and used them in the war, suppling the Army's in Europe. Peerless changed the corporate name to Peerless Truck and Motor Car Company in the teens. This was a result of a stock take-over that took place in 1915. The General Vehicle Company from Long Island was involved with this. Kenneth J. Boedecker began his engine career in 1914, working in the Long Island shops of a General Electric subsidiary called General Vehicle Company About Specimens Specimen Certificates are actual certificates that have never been issued. They were usually kept by the printers in their permanent archives as their only example of a particular certificate. Sometimes you will see a hand stamp on the certificate that says "Do not remove from file". Specimens were also used to show prospective clients different types of certificate designs that were available. Specimen certificates are usually much scarcer than issued certificates. In fact, many times they are the only way to get a certificate for a particular company because the issued certificates were redeemed and destroyed. In a few instances, Specimen certificates we made for a company but were never used because a different design was chosen by the company. These certificates are normally stamped "Specimen" or they have small holes spelling the word specimen. Most of the time they don't have a serial number, or they have a serial number of 00000. This is an exciting sector of the hobby that grown in popularity over the past several years.