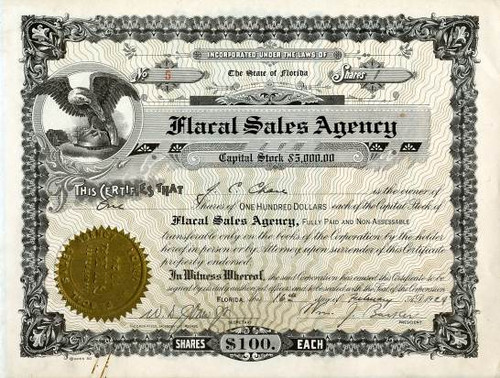 Beautifully engraved certificate from the Flacal Sales Agency issued in 1924. This historic document has an ornate border around it with a vignette of an eagle and has an embossed corporate seal. This item has the signatures of the Company's President, William J. Barker and Secretary, W. S. Jones, Jr and is over 81 years old. The Flacal Sales Agency operated from 1924 to 1936 and was acquired by Sydney Octavius Chase, Jr., Joshua Coffin Chase and Chase & Co. The Florida citrus industry in the late 1920's turned-out to be a precursor the economic depression that hit the rest of the country after the stock market crash of 1929. It was precipiated by the real estate boom in Florida which lead to an explosion in road building, with a vast expansion of paved roads available growers were able to ship directly from their groves, thus flooding the markets (particulalry in the southeast) with citrus fruit. A consequence of this was that considerabel amounts were of questionable qulity, hurting the industry as a whole. As a result the industry turned to the Florida Citrus Exchange (established in 1909) to act as the agency through which the industry could impose self-regulation. Fiercely independent and suspect of anything they could directly control the Chase's refrained from joining the industries cooperative movement unitl 1928, when bowing the the 'inevitable', they negotiated a complex agreement with the Exchange and its head, C.C. Commander. Within three years the agreement fell-through, the independent Chases clashing with the autocratic Commander (correspondence re resulting the lawsuit is contained in the firts accession), and Chase & Co. reverted to operating independently . Even at times seemed to aligned herself with the economic conditions of the time; in 1927 and again in 1934 heavy freezes caused major crop losses (including winter vegetable) and grove damage throughout the state. This was followed by a period of severe drought in the latter half of the 1930's and another major freeze in 1940. Despite these difficult conditions Chase & Co., along with a majority of the industry, managed to survive and beneft from 'liquidity opportunities' which arose during these two decades (depression in land prices, large numbers of foreclosed agricultural properties, underpriced securities, etc.). The advent of WWII brought both new difficulties for the Florida citrus and vegetable industries, and a new prosperity. The vastly increased demand for foodstuffs (with the government as the major purchaser) insured a steady market, with stabilized prices. Despite the labor, materials (embargoe/halt to imported fertilizers and chemicals from Germany and its occupied territories) and transportation problems (fuels, parts and rubber/tire rationing) that an economy transiting to war production created for the non-industrial sectors, the major problem having been that water and rail transportation were requistioned for goverment/military use, Chasee & Co. managed to met its production commitments. This was largely due to the efforts and organizational abilities of W.A. 'Billy' Leffler, who served as President of the Company during this period. Leffler was a life-long confidant of Sydney O. Chase, Sr. and was also largely responsible for the expansion of the fertilizer departments (phosphate mining) and the development of the chemical and building supply lines. Notable is the fact that he was also directly responsible for introducing a new agricultural product that would change the face of central Florida, sweetcorn in Seminole County, and later in the Zelllood and Glades areas. WWII instigated to a major change in the demographics of the state. In order of aliveate the severe farm labor shortage created by its massive conscription programs, the federal governement sponsored the 'temporary' immigration of thousands of workers from Jamiaca, Hiati, and the Bahamas. The Papers offer glimpses of the working conditions and arrangements (and the lobbying after the conclusion of WWII by the major players in the industry) that would lead to the 'H-2' programs of the following decades that established migrant workers as an intregal part of the states agricultural industries. The post-war era brough renewed economic challenges to the citrus industry... one in which the Chase's still maintained a heavy involvement. Fruit prices declined as production rose in the peacetime economic environment; with consequently the market was thrown into disarray despite the best efforts of the Florida Citrus Commission (established in 1935). While the quality and quantity of Florida fruit being shipped out-of-state was increasing, it was doing so againit increasing competition from other citrus growing regions in the country and abroad. During the late 1940's two major events occurred that changed the character of the citrus industry. The first, and most important, was the perfection of the the frozen juice concentrate process. This greatly increased the demand for citrus products, and even more importantly gave the industry a new marketing medium - a food product with an indefinite self-life for both the processer and the merchandiser. The second was the formation of the Florida Citrus Mutual. The establishment of this industry-wide cooperative organization brought rational to the previously chaotic marketing of Florida citrus, brought all its diverse elements together-growers, packers, processers-and created a basis for the industry to start collective lobbying of agriculturally 'friendly' legislation on the state and national levels. Cautious as ever the Chases entered into this cooperative effort in a manner similar to the way they did with the Florida Citrus Exchange. For the Chases their citrus operations were the 'spiritual' center of their business enterprises, and any relinquishing of direct control was not easily done. By the end of the 1950's a large percentage of their citrus was being sold to processers; and with the catastrophic freeze of December 1962 they down the remaining of their fresh fruit packinghouses for the last time. Thereafter all of their product was sold directly to processing 'co-ops', in which their fruit was pooled with that of other growers and accounts settled months later. Information from A Guide to The Chase Papers in the P.K. Yonge Library of Florida History