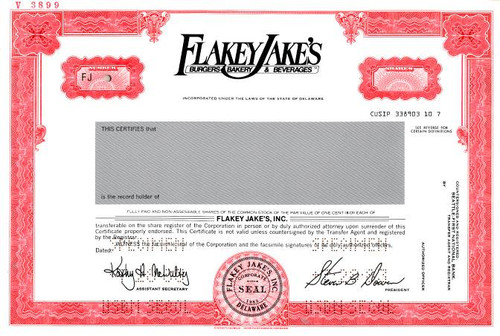 Beautifully engraved specimen certificate from the Flakey Jake's, Inc. printed in 1983. This historic document was printed by the Security-Columbian United States Banknote Corporation and has an ornate border around it with a vignette of the Company's name. This item has the printed signatures of the Company's President, and Assistant Secretary, and is over 33 years old.

Certificate Vignette
Created by a team of Sea Galley Stores Inc. officials, who were in search of an expansion concept in 1983, Flakey Jake's served large, grilled burgers on house-baked buns. Some of the units, which had a decor suggestive of a visit to an old Western town, complete with fake storefronts, featured a full bar. Early in its run, the Bellevue, Wash.-based chain was hauled into court by Fuddruckers Inc., a competing burger chain that claimed Sea Galley had copied its trade dress to create the Flakey Jake's concept. As a result of the court action, Flakey Jake's agreed to change some of its design and decor package. Sea Galley spun off Flakey Jake's and took it public in 1984, realizing a multimillion-dollar windfall from the sale of its stock. At its high points, Flakey Jake's stock sold for as much as $9 a share, and the chain operated 22 company restaurants and franchised more than 30 to others. However, the company never turned a profit and ended up costing investors millions of dollars before it filed for bankruptcy, at which point it owed creditors about $25 million. History from StockResearch.pro (Professional Old Stock Certificate Research Service). About Specimen Certificates Specimen Certificates are actual certificates that have never been issued. They were usually kept by the printers in their permanent archives as their only example of a particular certificate. Sometimes you will see a hand stamp on the certificate that says "Do not remove from file". Specimens were also used to show prospective clients different types of certificate designs that were available. Specimen certificates are usually much scarcer than issued certificates. In fact, many times they are the only way to get a certificate for a particular company because the issued certificates were redeemed and destroyed. In a few instances, Specimen certificates were made for a company but were never used because a different design was chosen by the company. These certificates are normally stamped "Specimen" or they have small holes spelling the word specimen. Most of the time they don't have a serial number, or they have a serial number of 00000. This is an exciting sector of the hobby that has grown in popularity over the past several years.