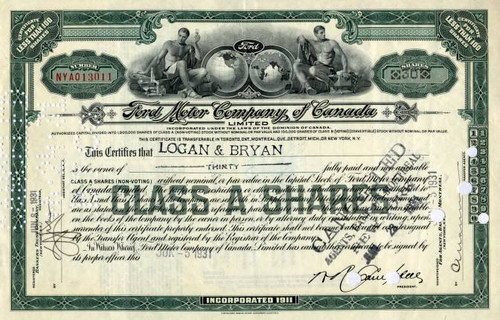 Beautiful certificate from the Ford Motor Company of Canada issued in 1931. This historic document was printed by the Canadian Bank Note Company and has an ornate border around it with a vignette of allegorical figures flanking the Ford logo. This item has the printed signatures of the Company's President, and is over 82 years old.

Certificate Vignette
On August 17, 1904, the Ford Motor Company was founded in Walkerville, Ontario. The Company had gained all Ford patent rights and selling privileges to all parts of the British Empire, except Great Britain and Ireland. The Model C, the first car to be produced in Canada, rolled out of the factory in late September 1904. The Company could produce two cars at a time and in its first full year of production, the Company was able to produce 117 automobiles. The Company's first export sales were to Calcutta, India. The Company is still an important manufacturing enterprise in Windsor. The first car built by the Ford Motor Company of Canada in early 1904 was the Model C. A total of 117 cars were made in the first year. Most were 2-cylinder Model C's but a few 4-cylinder Model B's were also built. Both were made in 1905 along with the Model F, a new 2-cylinder car. In 1906, both the C and B were discontinued, but two new models came on the scene. The Model N was a low-priced 4-cylinder car, but the 406 cid 6-cylinder Model K was huge and expensive. The F was gone by 1907, but there were two new Fords--Model R and Model S. Both were 4-cylinder cars, and built along with the Model N and Model K through much of 1908. Production of all those models ceased when the Model T made its debut in October 1908. The Canadian-made Fords were similar to the American models, although there may have been minor departures due to the use of Canadian components. Ford of Canada constantly tried to keep a high level of Canadian content. During the Model T era, Ford of Canada chose not to produce some body types. For instance, sometimes there were no Canadian 2- door Model T sedans. Four-door Model T sedans were made in Canada before they were in the U.S. Four doors were convenient for people going from province to province where right and left drive laws varied. Some body types were sold under different names. When the American T Runabout was called a Roadster in 1923, Ford of Canada continued calling it a Runabout. It was also in 1923, when Ford called the 2-door sedan a Tudor. Ford of Canada adopted the same name for it, and even went further and called the 4-door sedan a Fordor. Ford used that term for many years, but it originated in Canada and used for five years before it was in the States. The arrival of the Model A brought a much greater variety of body types, though Ford of Canada never produced quite all the body styles made south of the border. Model A station wagons, for instance, were never made in Canada. Ford's famous V-8 was introduced in mid 1932, simultaneously in both countries. Ford of Canada dropped 4-cylinder cars in 1933, while they were on the market a year longer in the U.S. The northern firm produced some body types not made in the States. From 1929 through 1936, Rumble Seat models were available in more varieties for Canadians than Americans. Also for 1936, all Canadian-built Tudors had trunks, while this was not always true in the States. In addition, Canadians were treated to the Special DeLuxe, a top-line series of 10 models above the DeLuxe. The little 134 cid 60 hp V-8 appeared in both countries in 1937. It was an economical alternative to the regular V-8. But, Ford of Canada stopped offering it in the 1939 lineup. It continued to be available in the U.S. until the 1941 models arrived. Ford's first 6-cylinder car since the Model K made its debut in the 1941 models. Buyers could choose it or the V-8, but only in the States. Not until many years later did Ford of Canada offer a 6-cylinder engine. The 1941 Fords in both countries came in three series: Special, DeLuxe and Super DeLuxe. There were only two series for 1942, but not the same two in both countries. Ford of Canada kept the entry-level Special and deleted the Super DeLuxe. In contrast, Ford in the States deleted the Special and kept the top-line Super DeLuxe. With the growth in car sales after World War II, Ford of Canada decided to move its head office and build a new assembly plant in Oakville, Ontario. The new Oakville assembly plant was opened in 1953. In order to meet ever increasing demand, the Company opened a new assembly plant in Talbotville, Ontario in 1967. Historically Ford was one of most powerful companies in Canada, and in the 1970s, Ford was the "largest" company in Canada. Ford of Canada celebrated its Centennial in 2004, shortly after the Parent Company Ford in the United States did in 2003. History from Wikipedia and OldCompany.com (old stock certificate research service).