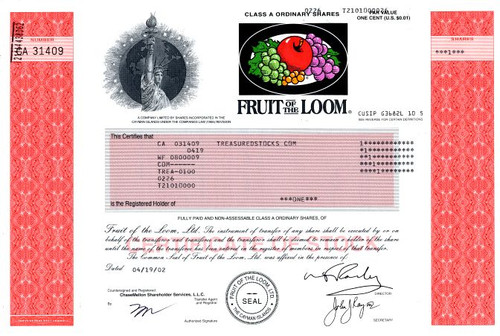 Beautifully engraved certificate from the Fruit of the Loom issued in 2002. This historic document was printed by the American Banknote Company and has an ornate border around it with a vignette of the company's logo, various fruits. This item has the printed signatures of the Company's Director, and Secretary, and is over 9 years old. 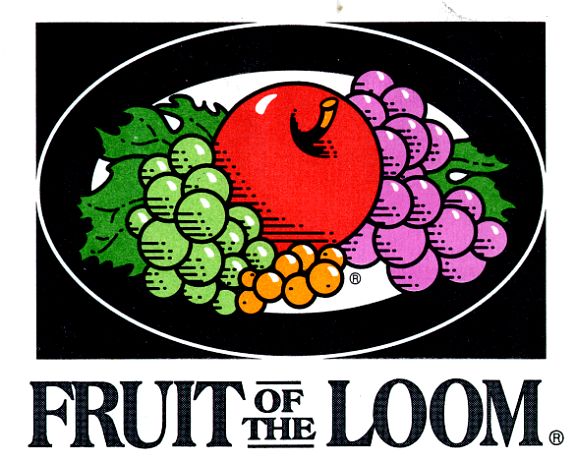 Certificate Vignette
Fruit of the Loom is an American company which manufactures clothing, particularly underwear. The company's world headquarters is in Bowling Green, Kentucky. It is currently a subsidiary of Berkshire Hathaway. Fruit of the Loom's main business focus is on branded products for consumers ranging from children to senior citizens. The company is one of the largest manufacturers and marketers of men's and boys' underwear, women's and girls' underwear, printable T-shirts and fleece for the activewear industry, casualwear, women's jeanswear and childrenswear. The company sells its products to all major discount chains and mass merchandisers, wholesale clubs and screenprinters. The company also sells to many department, specialty, drug and variety stores, national chains, supermarkets and sports specialty stores. Fruit of the Loom offers an unconditional guarantee on all the products it sells. The brand has significant market share for basic apparel. The familiar logo with the apple, purple grapes, green grapes, currants and leaves is a widely recognizable trademark. The company is a vertically integrated manufacturer. The company also controls another long-known underwear brand, B.V.D. (Bradley, Voorhees, and Day). Other brands also manufactured and sold by the company are Funpals/FunGals, Screen Stars and Underoos. Brands once owned or marketed by Fruit of the Loom include Gitano, Munsingwear, Salem Sportswear, and Pro Player, which once had the naming rights to what is now Sun Life Stadium (originally Joe Robbie Stadium) in Miami, Florida from 1996 to 2005, despite bankruptcy by the parent company in 1999. Hanes and Jockey are the main competitors to Fruit of the Loom. The Fruit Of the Loom logo consists of an apple, leaves, purple grapes, green grapes, and gooseberries. In TV commercials for the brand, actors play the roles of only four of the logo's parts: the apple, green grapes, purple grapes, and leaves. The role of "Apple" is played by Rad Daly, and the "Leaf" was at one time played by Academy Award-winning actor F. Murray Abraham. "Green Grapes" is played by Richard Steven Horvitz. The Fruit of the Loom brand dates back to 1851 in Rhode Island when Robert Knight, a textile mill owner, visited his friend, Rufus Skeel. Mr. Skeel owned a small shop in Providence, Rhode Island that sold cloth from Mr. Knight's mill. Mr. Skeel's daughter painted images of apples and applied them to the bolts of cloth. The ones with the apple emblems proved most popular. Mr. Knight thought the labels would be the perfect symbol for his trade name, Fruit of the Loom -- a name that bears resemblance to the phrase "fruit of the womb", an expression meaning "children", which can be traced back to use in the Bible (Psalm 127:3). In 1871, just one year after the first trademark laws were passed by Congress, Mr. Knight received patent number 418 for the brand, Fruit of the Loom. Much of its athletic outerwear was sold under the "Pro Player" label, a now defunct division. The company was part of Northwest Industries, Inc., until NWI was purchased by William F. Farley in 1985 and renamed Farley Industries, Inc. Farley served as President, CEO, and majority shareholder for 15 years. Fruit of the Loom's sales revenue rose from approximately $500 million at the time of NWI's purchase to roughly $2.5 billion nearly 15 years later. Debt financing, once seen as brilliant, proved difficult to manage even as sales revenue quintupled. Fruit of the Loom filed for Chapter 11 bankruptcy protection in 1999 shortly after posting a net loss of $576.2 million. Its 66 million shares of outstanding common stock dropped in value from about $44 per share in early 1997 to just more than $1 by the spring of 2000. Reasons for the bankruptcy are varied. A large debt load which was assumed in the 1980s, a common practice at the time, did not help. William F. Farley, the company's former chairman, chief executive officer, and chief operating officer was forced out prior to bankruptcy in late 1999, after having piloted the company into massive debt and unproductive business ventures, including structuring the company into an off-shore entity in the Cayman Islands to avoid taxes. The company was bought from bankruptcy by Berkshire Hathaway Corporation, controlled by legendary investor Warren Buffett, who wanted the valuable brand. He agreed in January 2002 to purchase the company for approximately $835 million in cash. The deal was concluded on April 29, 2002. A condition of the purchase required that former Chief Operating Officer and the then interim CEO, John Holland, remain available to be the CEO for the company. The company purchased Russell Corporation, effectively taking the former competitor private in a deal that was completed August 1, 2006. The company announced the purchase of VF Corporation's intimate apparel company named Vanity Fair Intimates for $350 million in cash on January 23, 2007. Stock research by OldCompany.com (old stock certificate research service).