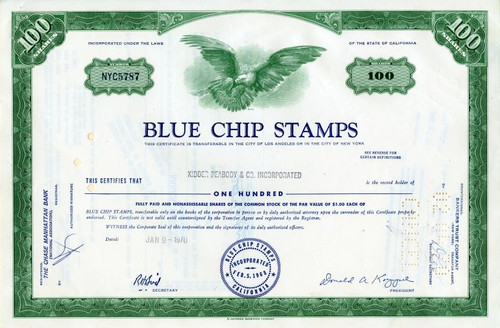 Beautiful certificate from Blue Chip Stamps, Inc issued in 1969 and 1970. This historic document was printed by the American Banknote Company and has an ornate border around it with a vignette of an eagle. This item has the printed signatures of the Company's officers. 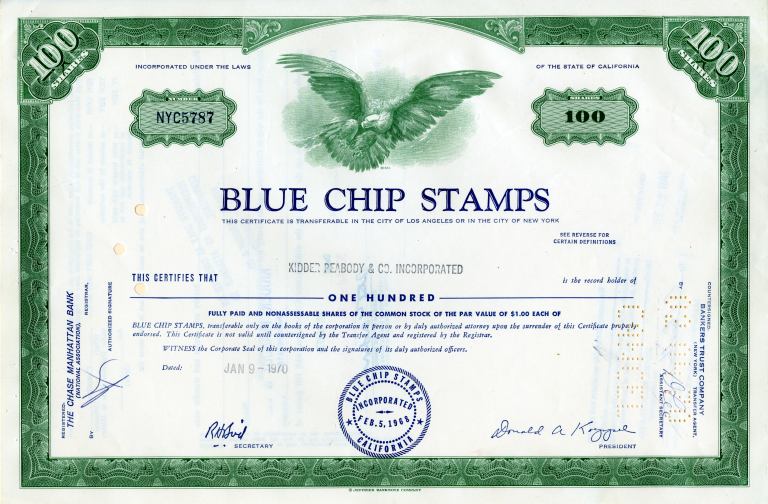 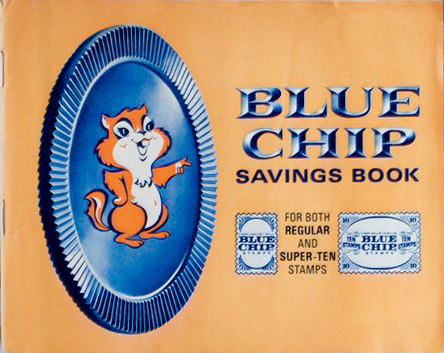 Blue Chip Stamps started as a trading stamps company called "Blue Chip Stamp Co." They were a competitor to S&H Green Stamps. Blue Chip stamps were a loyalty program for customers, similar to discount cards issued by pharmacies and grocery stores in the digital era. A customer making a purchase at a participating store (typically grocery stores, gasoline stations, and pharmacy chains) would be given stamps in proportion to the size of the purchase. The stamps would be issued by machines next to the cash register. The customer would paste the stamps (which could be licked or moistened with a sponge, like postage stamps) into books. Pasting a large number of stamps into books could be time consuming. The books could then be taken to a special redemption store and redeemed for merchandise, such as lawn furniture, dining tables, table ware, and many other items. The redemption stores did not keep a full inventory of items, but would order from a catalog on behalf of the customer. The loyalty program was paid for through the overall pricing of goods in the participating stores. When the recession of 1980 hit, cost cutting caused the program to lose popularity, and the growth of credit card transactions competed for retail margins. As computerization developed, less cumbersome loyalty programs were developed. These programs required less of a customer's time and also had lower operational costs: they did not require retail outlets for the redemption of stamps, and the discounts often were restricted to the products offered by the participating stores, i.e., the participating stores were discounting merchandise that they would keep in stock even without the reward program. In 1963, the United States government began an antitrust action against Blue Chip Stamp. In 1967, the parties agreed to a consent decree which led to the creation of a new company "Blue Chip Stamps". In 1975, a lawsuit filed by Blue Chip Stamps was decided by the Supreme Court in the opinion Blue Chip Stamps v. Manor Drug Stores. This ruling helped establish the precedent that only buyers or sellers of securities can file suit for damages due to deceptive practices. Berkshire Hathaway, the investment vehicle of Warren Buffett, began investing in Blue Chip Stamps in 1970. Berkshire's investment in Blue Chip went from 36.5% in 1977, to 60% in 1979, and finally merged in a stock swap in 1983. According to Buffett's 2006 letter to Berkshire shareholders, Blue Chip had 1970 sales of $126 million as about 60 billion of "stamps were licked by savers, pasted into books, and taken to Blue Chip redemption stores." He also said, "When I was told that even certain brothels and mortuaries gave stamps to their patrons, I felt I had finally found a sure thing." Sales dropped to $19.4 million in 1980 and $1.5 million in 1990. In 2006, revenues came in at $25,920. On January 3, 1972, Blue Chip obtained a controlling interest in See's Candy Shops. Blue Chip later acquired 100% of See's for an overall price of $25 million. Wesco Financial Corporation was an 80.1% owned subsidiary of Blue Chip Stamps until its complete merger into Berkshire Hathaway in 2011. History from Wikipedia, Encyberpedia and OldCompany.com (old stock certificate research service)