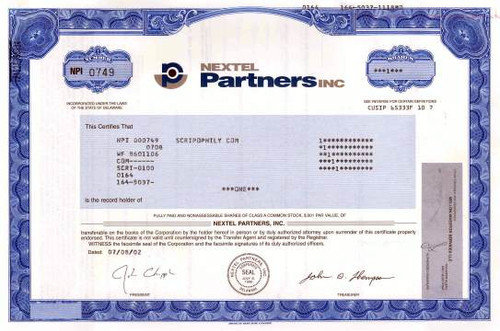 Beautifully engraved certificate from the Nextel Partners Inc. This historic document was printed by the American Banknote Company and has an ornate border around it with a vignette of the company logo. This item has the printed signatures of the Company's President ( John Chapple ) and Treasurer.

Certificate Vignette
Nextel Partners provides digital wireless communication services in mid-sized and smaller markets throughout the United States. They hold or have the right to use wireless frequencies in 58 markets where approximately 51 million people live or work (Pops). Their licensed territory includes 15 of the top 100 Metropolitan Statistical Areas and 55 of the top 200 Metropolitan Statistical Areas, as ranked by population. Nextel Partners offers its customers the same fully integrated four-in-one services available from Nextel, which include digital cellular, text/numeric messaging, Nextel Wireless Web services and Nextel Direct Connect digital two-way radio, all in a single wireless phone. Nextel Partners customers can seamlessly access these services anywhere on Nextel's or Nextel Partners' all-digital national network, which currently covers 197 of the top 200 U.S. markets. June 2002: Recognizing its continued focus on 100 percent partner (employee) satisfaction, Nextel Partners (Nasdaq:NXTP) was named "Best Company to Work For" for the second year running by Washington CEO magazine. May 2002: Nextel and Nextel partners maintained the highest overall approval rating from its customers for the second consecutive quarter according to Cahners In-Stat/MDR's wireless Internet customer satisfaction study. January 2002: Nextel and Nextel Partners customers rank its wireless Internet better than any other wireless carrier in the U.S., according to Cahners In-Stat/MDR Group. October 2001: Nextel Partners named "Rising Star" by Deloitte & Touche for outstanding revenue growth. June 2001: Nextel Partners named "Best Large Company to Work For" by Washington CEO magazine. JOHN CHAPPLE worked to organize Nextel Partners throughout 1998 and has been the President, Chief Executive Officer and Chairman of the Board of Nextel Partners and our subsidiaries since August 1998. Mr. Chapple was elected to our board of directors pursuant to the terms of our shareholders' agreement. Mr. Chapple, a graduate of Syracuse University and Harvard University's Advanced Management Program, has nearly 21 years of experience in the cable television and wireless communications industries. From 1978 to 1983, he served on the senior management team of Rogers Cablesystems before moving to American Cablesystems as Senior Vice President of Operations from 1983 to 1988. From 1988 to 1995, he served as Executive Vice President of Operations for McCaw Cellular Communications and subsequently AT&T Wireless Services following the merger of those companies. From 1995 to 1997, Mr. Chapple was the President and Chief Operating Officer for Orca Bay Sports and Entertainment in Vancouver, B.C. During Mr. Chapple's tenure, Orca Bay owned and operated Vancouver's National Basketball Association and National Hockey League sports franchises in addition to the General Motors Place sports arena and retail interests. Mr. Chapple is the past Chairman of Cellular One Group and the Personal Communications Industry Association, past Vice-Chairman of the Cellular Telecommunications Industry Association and has been on the Board of Governors of the NHL and NBA. Mr. Chapple is currently on the Syracuse University Maxwell School Board of Advisors. Modern Certificate Pricing Please note that if you buy a modern certificate from a discount or full service broker, it can cost you between $55 to $100 and that doesn't even include the cost of the stock. You will be charged for a commission and certificate issuance fee. Furthermore, if the company has been delisted and no longer traded, you will unable to get the certificate. Also, the modern certificates we offer have not been folded in thirds which is usually done if you order them directly from a broker. Lastly, the certificates are not issued in your name so if you frame the certificate and/or subsequently resell it as a collectible, the certificate won't have your personal information printed on its face. We do not require you to buy a frame from us for your certificate as it is optional.