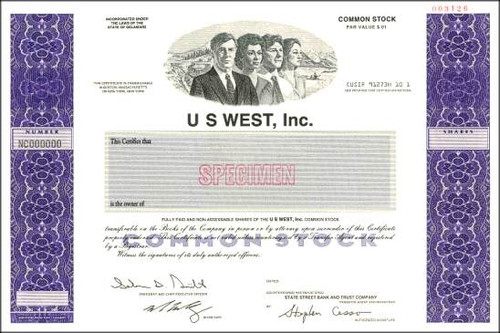 Beautifully engraved SPECIMEN certificate from the U.S. West, Inc. This historic document was printed by the American Banknote Company and has an ornate border around it with a vignette of business men and women with the Rocky Mountains in the Background. This item has the printed signatures of the company's President and Secretary. 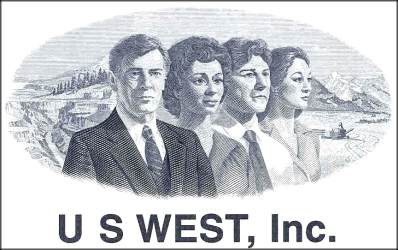 Certificate Vignette
In 2000, Qwest took a big step up in size and reach with the acquisition of U S WEST, the Denver-based 120-year old telecom giant that served 14 states throughout the West. The acquisition added the size and scale today's market demands of any top competitor, and a slate of advanced technologies -- such as leadership in Digital Subscriber Line (DSL) services, advanced frame relay, the country's largest Web-based yellow pages, PCS wireless and a network that features more than 99 percent digital switching. The combination of Qwest and U S WEST in 2000 created a $20 billion global giant with leadership in network technology, as well as applications and services. Its advanced fiber optic networks link directly to nearly 30 million customers. The company also has a rapidly growing presence in Europe, where its network connects 68 cities in 18 countries, and a foothold in Asia through a new Asia-Pacific office and interests in the US-Japan Cable project. About Specimen Certificates Specimen Certificates are actual certificates that have never been issued. They were usually kept by the printers in their permanent archives as their only example of a particular certificate. Sometimes you will see a hand stamp on the certificate that says "Do not remove from file". Specimens were also used to show prospective clients different types of certificate designs that were available. Specimen certificates are usually much scarcer than issued certificates. In fact, many times they are the only way to get a certificate for a particular company because the issued certificates were redeemed and destroyed. In a few instances, Specimen certificates we made for a company but were never used because a different design was chosen by the company. These certificates are normally stamped "Specimen" or they have small holes spelling the word specimen. Most of the time they don't have a serial number, or they have a serial number of 00000. This is an exciting sector of the hobby that grown in popularity and realized nice appreciation in value over the past several years.