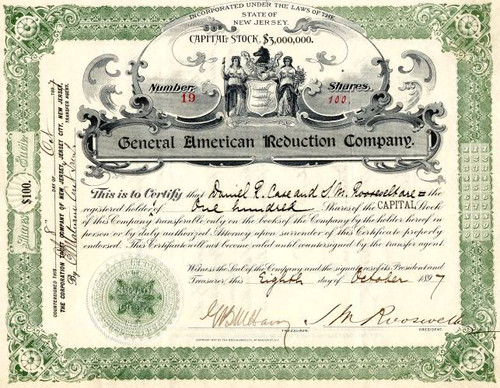 Beautifully engraved certificate from the General American Reduction Company issued in 1897. This historic document was printed by the Brown-Green Company and has an ornate border around it with a vignette of two allegorical women with a coat of arms. This item has the handwritten signatures of the Company's President, Samuel Montgomery Roosevelt and Treasurer, and is over 114 years old.

Certificate Vignette
Samuel Montgomery Roosevelt (February 20, 1858 - August 19, 1920) was an American artist and merchant from New York City. A wine merchant by trade, he was the son of prominent businessman Samuel Roosevelt (18131878) and the grandson of Nicholas Roosevelt, an inventor involved with the steamboat. He was educated at St. John's School in Ossining, New York and studied art at the Art Students League of New York and in Paris, and studied painting under Jean-Joseph Benjamin-Constant and Jean-Paul Laurens. An accomplished portrait artist, he is remembered for his portraits of his distant cousin Theodore Roosevelt, Oliver Belmont, Hudson Maxim, Henry Shoemaker, and others. His work was exhibited at the Paris Salon and the National Academy of Design and in Philadelphia and Chicago. He was President of the National Association of Portrait Painters from 1912 until his death. He was also New York City Commissioner of Schools. Roosevelt was also an active sportsman, skilled at fencing and interested in yachting. He went to Colorado in 1878 on ranching and scouting expeditions with the ninth cavalry against the Ute Indians,[ and was described as having been a "cowboy" for a period by a cousin upon his death. He entertained frequently and gained notoriety for once serving a whole roasted baby lion to guests. He was a chevalier of the French Legion of Honor. He married Augusta E. Boylston (nÃ©e Shoemaker) of Baltimore on May 5, 1885. In 1899, he bought a 25-room mansion on Skaneateles Lake in Skaneateles, New York (his grandfather had sold land that made up part of the town). Theodore visited in 1915, and Franklin Delano Roosevelt twice; Robert F. Kennedy considered buying the house when he was running for the U.S. Senate in 1964. SAMUEL MONTGOMERY ROOSEVELT-- Importer, 99 Pearl street, New York City; residence 1032 Fifth avenue, and Roosevelt Hall, Skaneateles. Born in New York City. Educated in Paris, France. President General American Reduction Co. Senior member of the firm of Roosevelt & Schuyler. Ex-school commissioner. Member Knickerbocker, Lambs', Manhattan, Fencers' and Larchmont Yacht Clubs. American Reduction Process, Reading, Pa. The experience of this city with garbage disposal methods has not been of a pleasing nature. The first attempt to improve existing methods was in 1897, when a contract was made with the Davis Garbage Crematory Company, of Lancaster, Pa., for a furnace rated at 80 tons capacity, at the price of $9,850. Upon the completion and trial the furnace was found not to meet the terms of contract in point of capacity and operation and the plant was abandoned. carries it to the digester floor, the glass, tins, etc., being removed while in transit. In the fall of 1898, the city contracted with the General American Reduction Company, a company organized under New Jersey State laws, for the disposal of garbage for a term of five years by some satisfactory reduction process. The City Trust Deposit Company, of Philadelphia, became the bondsman on behalf of the company. The company was to receive 65 cents per ton for disposal, and pending the erection of their plant were to rebuild the Davis crematory. The company occupied a brick building at Millmont, a suburb of the city, which was equipped with reduction apparatus. After a year's effort the company ceased work and abandoned the plant to the city, basing this action on the claim that not enough garbage was being delivered to enable them to operate at a profit. The city, viewing the matter as a breech of contract, brought suit against the reduction company and their bonding company in 1902. The latter went into the hands of a receiver, with no recoverable assets. The reduction company claimed the machinery in the plant, but was enjoined from removing it. The matter was compromised by paying the company $500 and allowing them to remove the machinery and restore the building to its former condition. The method employed was that of the American reduction process, but no details as to the quantities handled or the value of the products can be had. The Collection and Disposal of Municipal Waste Bv Wm. F. Morse Copyright, 1908