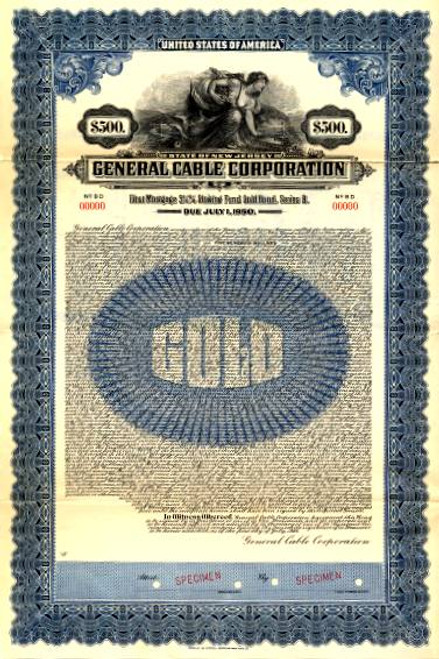 Beautifully engraved Specimen Gold Bond Certificate from the General Cable Corporation dated 1928. This historic document was printed by Franklin-Lee Division and has an ornate border around it with a vignette of allegorical woman leaning over an electric train. Slight tears and shows wear. Taped. 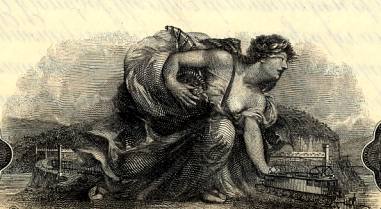 Certificate Vignette
General Cable Corporation was originally incorporated in New Jersey in 1927. At that time it brought together the plant facilities and manufacturing experience of several older companies founded in the 1800s including Phillips Wire and Safety Cable Company and Standard Underground Cable founded by George Westinghouse. 1927 - After officially incorporating in New Jersey, the Company designed a distinctive identity by which it would be known to its many customers, suppliers, investors and associates. The trademark logo represented three lengths of cable overlaid on one another, with the words "General Cable" on each length. 1929 - Produced the first 75,000-volt submarine cable in the United States for the Delaware River Crossing. It was manufactured in 4,050-foot lengths the longest ever without joints. 1935 - Supplied 100% of the cable for the power transmission line from the Hoover Dam to Los Angeles--1,626 conductor miles. 1942 - Produced a series of wartime posters for the World War II Home-Front Campaign to build morale, to speed production and to encourage economy and conservation of critical materials which were distributed to the armed forces, government officials and manufacturing plants involved in the war efforts. 1943 - Manufactured 140 miles of hollow tube designed to transport 120 million gallons of diesel fuel between England and France for the D-Day invasion -- Code Name: "Operation Pluto." PLUTO stood for PipeLine Under The Ocean. 1945 - Produced 80% of the battlefield communications wire used by the Allies and 50% of the Navy's power and communications cable. 1961 - Produced the control and communication cable for the first group of Minuteman Missile Bases. 1964 - Adopted a new logo to reinforce and promote the letters "GCC" as the accepted abbreviation for General Cable Corporation. General Cable headquartered in Highland Heights, Kentucky, is a leader in the development, design, manufacture, marketing and distribution of copper, aluminum and fiber optic wire and cable products for the energy, industrial, specialty and communications markets. The Company offers competitive strengths in such areas as breadth of product line, brand recognition, distribution and logistics, sales and service and operating efficiency. Energy cables include low-, medium- and high-voltage power distribution and power transmission products. The Industrial and Specialty segment is comprised of application-specific cables for uses such as electrical power generation (traditional fuels, alternative and renewable sources, and distributed generation), the oil, gas and petrochemical industries, mining, industrial automation, marine, military and aerospace applications, power applications in the telecommunications industry, and other key industrial segments. Communications wire and cable products transmit low-voltage signals for voice, data, video and control applications. History from company press information. About Specimens Specimen Certificates are actual certificates that have never been issued. They were usually kept by the printers in their permanent archives as their only example of a particular certificate. Sometimes you will see a hand stamp on the certificate that says "Do not remove from file". Specimens were also used to show prospective clients different types of certificate designs that were available. Specimen certificates are usually much scarcer than issued certificates. In fact, many times they are the only way to get a certificate for a particular company because the issued certificates were redeemed and destroyed. In a few instances, Specimen certificates we made for a company but were never used because a different design was chosen by the company. These certificates are normally stamped "Specimen" or they have small holes spelling the word specimen. Most of the time they don't have a serial number, or they have a serial number of 00000. This is an exciting sector of the hobby that grown in popularity and realized nice appreciation in value over the past several years.