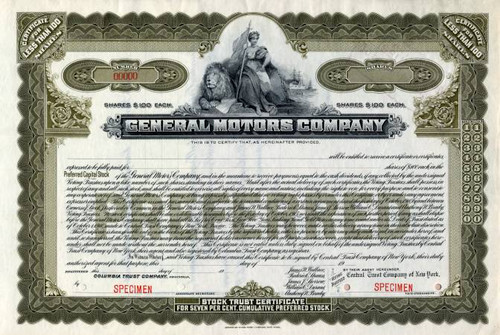 Beautifully engraved RARE Preferred certificate from the General Motors Corporation printed in 1910. This historic document was printed by the American Banknote Company and has an ornate border around it with a vignette of an allegorical woman sitting with a lion. This is the earliest GM specimen certificate we have seen and believe it to be quite rare, possibly unique. We have seen one brown certificate before but never a green certificate. This certificate also shows the original Voting Trustees names for General Motors. The Trustees were J.N. Wallace, Frederick Strauss, J.J. Storrow, Anthony Brady and William Crapo Durant. The Central Trust Company of New York was the Agent bank. 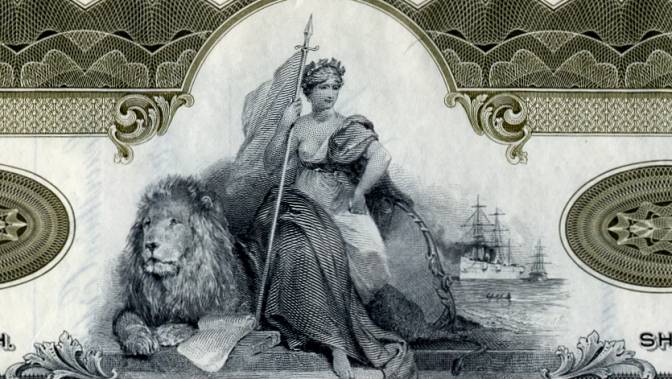 Original Voting Trustees
General Motors Corporation was first founded on September 16, 1908, in Flint, Michigan, as a holding company for Buick, then controlled by William C. Durant. GM's co-founder was Charles Stewart Mott, whose carriage company was merged into Buick prior to GM's creation. Over the years Mott became the largest single stockholder in GM and spent his life with his Mott Foundation, whose benefit was shone on the city of Flint, his adopted home. It acquired Oldsmobile later that year. In 1909, Durant brought in Cadillac, Elmore, Oakland and several others. Also in 1909, GM acquired the Reliance Motor Truck Company of Owosso, Michigan, and the Rapid Motor Vehicle Company of Pontiac, Michigan, the predecessors of GMC Truck. Durant lost control of GM in 1910 to a bankers' trust, because of the large amount of debt taken on in its acquisitions coupled with a collapse in new vehicle sales. The next year, Durant started the Chevrolet Motor Car Company and through this he secretly purchased a controlling interest in GM. Durant took back control of the company after one of the most dramatic proxy wars in American business history. Durant then reorganized General Motors Company into General Motors Corporation in 1916. Shortly after, he again lost control, this time for good, after the new vehicle market collapsed. Alfred P. Sloan was picked to take charge of the corporation and led it to its post-war global dominance. This unprecedented growth of GM would last into the early 1980s when it employed 349,000 workers and operated 150 assembly plants. GM previously led in global sales for 77 consecutive years (1931 to 2008), longer than any other automaker. About Specimen Certificates Specimen Certificates are actual certificates that have never been issued. They were usually kept by the printers in their permanent archives as their only example of a particular certificate. Sometimes you will see a hand stamp on the certificate that says "Do not remove from file". Specimens were also used to show prospective clients different types of certificate designs that were available. Specimen certificates are usually much scarcer than issued certificates. In fact, many times they are the only way to get a certificate for a particular company because the issued certificates were redeemed and destroyed. In a few instances, Specimen certificates were made for a company but were never used because a different design was chosen by the company. These certificates are normally stamped "Specimen" or they have small holes spelling the word specimen. Most of the time they don't have a serial number, or they have a serial number of 00000. This is an exciting sector of the hobby that has grown in popularity over the past several years.