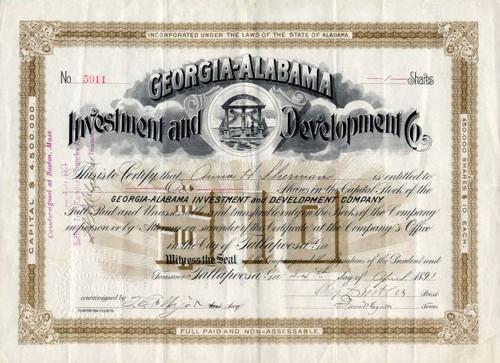 Beautiful certificate from the Georgia-Alabama Investment and Development Company Company issued in 1891. This historic document has an ornate border around it with the company seal. This item has the original signatures of the Company's President, Treasurer and Secretary, and is over 121 years old.

Certificate Under Mark
Benjamin Franklin Butler (November 5, 1818 January 11, 1893) was an American lawyer and politician who represented Massachusetts in the United States House of Representatives and later served as the 33rd Governor of Massachusetts. In 1868, as a member of the U.S. House of Representatives, Butler had a prominant role in the impeachment of President Andrew Johnson. As Chairman of the House Committee on Reconstruction, Butler authored the Ku Klux Klan Act of 1871, signed into law by President Ulysses S. Grant, that gave federal authority to prosecute and destroy the Klan in the South. Butler authored, along with Sen. Charles Sumner, the Civil Rights Act of 1875, signed into law by President Grant. This law, a final act of Reconstruction, gave African American U.S. citizens the right to public accommodation such as hotels, restaurants, lodging, and public entertainment establishments. During the American Civil War, he served as a major general in the Union Army.
One of the most significant events related to the development and growth of Haralson County's towns during the 1880's occurred in Tallapoosa, Georgia. In 1884 the Georgia Pacific Railroad laid track three-fourths of a mile south of the center of Tallapoosa, outside the corporate limits of the town. Beginning in July 1887, Tallapoosa's development was stimulated by the investment and promotion activities of the Tallapoosa Land, Mining, and Manufacturing Company and subsequently, beginning in c. 1890, by the Georgia-Alabama Investment and Development Company. These companies successively owned or controlled large blocks of land in and around Tallapoosa and proposed to build a large and proserous manufacturing and residential city and health resort. A city was plotted and the promoters planned to build varous manufacturing facilities, a public school building, a great hotel at Lithia Springs, streetcar lines, wtaer works, electric light facilities, parks and various other public enterprises and improvements. History from Wikipedia and OldCompany.com (old stock certificate research service)