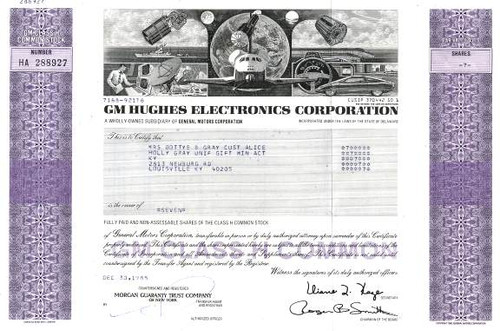 Beautifully engraved uncancelled certificate from the GM Hughes Electronics Corporation issued in 1989. This historic document was printed by the American Bank Note Company and has an ornate border around it with a vignette including satellites, ships, space shuttle, earth stations and more. This item has the printed signatures of the Company's Secretary and Chairman of the Board ( Roger Smith ) and is over 24 years old. Roger Smith was also Chairman of General Motors at the time. After this certificate was issued, the company later dropped GM from its name and was simply called Hughes Electronics. Folds otherwise Fine condition.