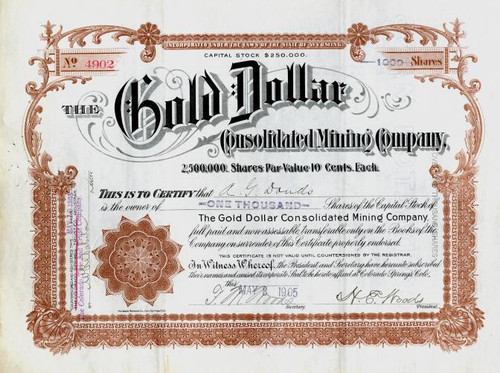 Beautiful stock certificate from the Gold Dollar Consolidated Mining Company, Inc. issued in 1905. This historic document was printed by Gowdy-Simmons Co, Colo Springs and has an ornate border around it with a vignette of the company's name in fancy print. This item has the signatures of the Company's President, Harry E. Woods and Secretary, Frank M. Woods, and is over 108 years old.

Certificate Vignette
Victor, Colorado Home Page The Woods Family Founders of Victor - Gold Coin Mine Visit the Gold Coin Mine at 4th & Diamond and see where Victor became golden. The mine site offers a look at the giant hoist, shaft and remaining buildings. Across the street is the famous Gold Coin Club, built in 1899 as a recreation hall for the miners. Also read about how hoist rope was sewn and more about the Woods family. Warren, Harry & Frank Woods entered the Victor scene in 1892. Warren Woods, the father, was born in 1834 in Ohio and was president of most of the Woods' enterprises. Harry Woods was born in 1859 in Illinois and was a newspaper man before moving to Colorado. Frank Woods lived in Victor during the heyday of the gold rush, managing the offices and operations of the Woods Investment Company. The Woods purchased the Mount Rosa Placer (This would later become known as the Cripple Creek & Victor Gold Mine) and incorporated the Mt. Rosa Mining, Milling and Land Company Jan. 9, 1892. The area was platted into lots and blocks, and the 137 acres brought the Woods over $50,000 by 1895. How Victor was named is not known, but the theory is that the Woods named it after one of the town's first pioneers, Victor Adams. By the time it was platted in 1893, it was already known as the City of Mines because the largest & richest gold mines of the Cripple Creek Mining District were located just above Victor on Battle Mountain. While Cripple Creek claimed all the shining glory of a wealthy gold camp, nearby Victor and its environs played the biggest important role in the production of the nearly $434,000,000 in gold ($6 billion in today's value) produced here. Victor was the working man's town of the mining district, supplying homes for much of the labor force that brought the wealth of gold to the surface in the 500-plus gold mines that once operated in the mining district. In March of 1894, about the time the Florence & Cripple Creek Railroad arrived in Victor, the Woods started building a hotel, which was greatly needed. While excavating for the foundation of the hotel, a vein of gold ore, which leads to the now famous Gold Coin vein, was opened. By then the town had a population of 8,000 residents. Aug. 21, 1899 it took wind-driven flames only five hours to destroy the bustling town that shortly afterward claimed it had 18,000 residents. The pioneering spirits that had already made Victor a stronghold in a rough mining camp at nearly 10,000 feet above sea level rebuilt the City of Mines with brick in less than 6 months after the fire. The Woods' other interests included the First National Bank of Victor and the Golden Crescent Water and Light Company. Their largest project, aside from the Gold Coin Mine, was the development of the Pikes Peak Power Company, which supplied Victor with hydroelectric power from a dam they built forming Skaguay Reservoir. The plant sold power to Victor, Cripple Creek and Pueblo and was the forerunner of the Southern Colorado Power Company. The power station has long since shut down but the Woods' innovation began the modernization of the Victor area in 1899. The Woods' empire ended in 1927. While the Woods empire was short-lived, the contributions made in those 30-plus years had a long and substantial impact on the mining district. History from Victor, Colorado Home Page, Encyberpedia and OldCompany.com (old stock certificate research service)