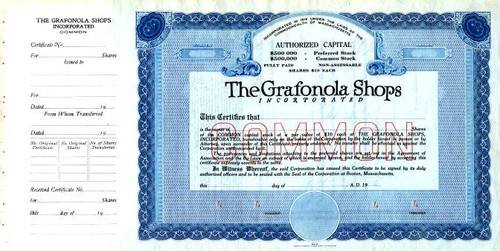 Beautifully engraved RARE specimen certificate from the Grafonola Shops Incorporated. This historic document was printed by the John A. Lowell Banknote Company and has an ornate border around it with the company's name on top center. The following is from the THE MUSIC TRADE REVIEW SEPTEMBER 25, 1920 GRAFONOLA SHOPS, INC., IN NEWARK Prominent Retailers of Columbia Line Lease Four-Story Building at 869 Broad Street, With John C. Button as General Manager An important announcement was made this week to the effect that the Grafonola Shops, Inc., of Boston, Mass., had leased the entire four story and basement building located at 869 Broad street, Newark, N. J., for a term of years. This company will open a branch store in Newark which will be a direct branch of Widener's Columbia shop, located at 411 Fifth avenue, New York. The transaction represents a sub-lease from the Oppenheim-Collins Co., a prominent merchandising" institution, which is located directly south df'the leased "premise's. The new store Will" concentrate' its activities on Columbia Grafonolas arid records, operating a store similar to the other eleven stores in this fast growing chain. J. G. Widener, president of the Grafonola Shops, Inc., and one of the best known members of the retail talking machine trade in the country, who personally conducted the negotiations incidental to the closing of the lease, is enthusiastic regarding the splendid location of his Newark branch and the unlimited possibilities for developing Columbia business in Newark territory. John C. Button, for many years associated with the Columbia Graphophone Co., and well known in retail talking machine circles, has been appointed manager of this new Columbia establishment, and under his capable direction an efficient sales organization is being developed.