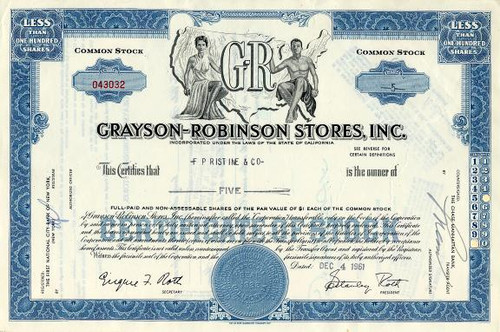 Beautifully engraved certificate from the Grayson-Robinson Stores issued in 1961. This historic document was printed by De La Rue Banknote Company and has an ornate border around it with a vignette of an allegorical man and woman. This item has the signatures of the Company's President, Stanley Roth and Secretary, Eugene F. Roth and is over 45 years old.

Certificate Vignette
Grayson-Robinson was a chain of nationwide specialty stores which started out in California concentrated in the West. Stanley Roth was a retailing executive for 61 years. Mr. Roth was a former chairman of Apparel Buying Associates Inc., president of Grayson-Robinson Stores Inc., president of the Darling Stores Corporation, a vice president and managing director of the Golden Rule Department Store in St. Paul, and vice president of Gimbel Brothers and general manager of Gimbels in Milwaukee. Mr. Roth graduated in 1918 from the University of Chicago. He was a former trustee of the Jewish Home and Hospital for the Aged in Manhattan and a founder and the first president of the Westchester County division of the Federation of Jewish Philanthropies. He was also a former president of the Jewish Community Services of Westchester. In 1979, he established the Stanley Roth Sr. Professorship of Retailing at the Harvard Graduate School of Business Administration.