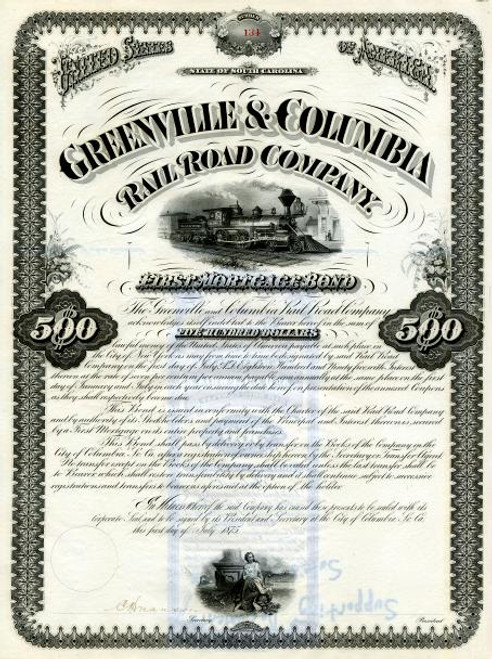 Beautifully engraved partially issued certificate from the Greenville and Columbia Railroad Company dated 1875. This historic document was printed by the Continental Banknote Company and has an ornate border around it with a vignettes of Baldwin Locomotive and train, and a woman. This item has the signature of the Company's Secretary, C. H. Mason. 40 unused coupons attached on right. 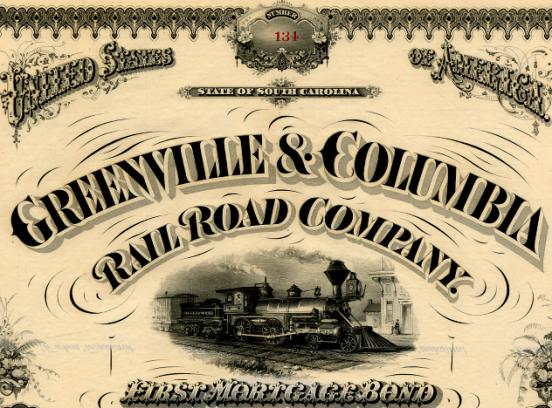 Certificate Vignette
Greenville and Columbia Railroad Company was chartered in 1845 and completed in 1854. It was a main feeder into Columbia from the South Carolina Piedmont for the Confederacy during the Civil War. After the war, politicians defrauded the state of South Carolina out of $400,000 in a failed investment in the troubled Greenville & Columbia Railroad Co. The loss was equal to a quarter of the state's revenues for that year. As a result of the failed investment, the State adopted a constitutional ban on investing public money in stocks. More than a century later South Carolina's $17 billion pension fund is entirely in fixed income, mostly A-rated bonds and Treasurys.