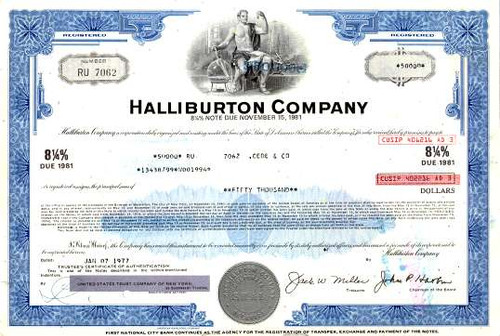 Beautifully engraved certificate from the Halliburton Company issued no later than 1977. This historic document was printed by the American Banknote Company and has an ornate border around it with a vignette of an allegorical man holding up a test tube with oil refinery equipment in the background. This item has the printed signatures of the company's chairman and treasurer and is over 29 years old. 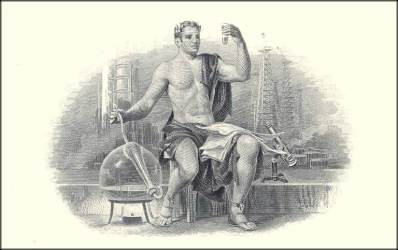 Certificate Vignette
Halliburton and Brown & Root have been the mainstays of the company since 1962 when they joined forces to form a unique and powerful corporate entity. And now through the merger with Dresser Industries, a world-class energy services company with its own history of success in the oil and gas business, Halliburton Company continues to offer additional value-added solutions to the energy industry. Erle P. Halliburton founded Halliburton in 1919. His ingenious oil well service methods revolutionized the oil industry. His grit and willingness to accept risk helped his company to rapidly grow into a worldwide oil field service company. Herman Brown, with his brother George, created one of the premier engineering and construction firms in the world. Also founded in 1919, Brown & Root embarked upon projects that the faint of heart wouldn't touch -- delving into the earth's core and revolutionizing earth sciences, designing and building massive industrial structures including platforms for deepwater oil and gas exploration, and aiding astronauts in their exploration of outer space. Dresser Industries was established as an energy services company in western Pennsylvania in 1880 during the nation's initial oil boom. In the 1930s, the company made a dramatic expansion into the compressor industry, leading to the next four decades of strong growth. In 1987, the acquisition of The M.W. Kellogg Company, the premier technology-oriented contractor for hydrocarbon processing projects, created a leading service role in downstream engineering and construction. Since this key acquisition, Dresser has concentrated on increasing its upstream supply capabilities and providing products, services and solutions for subsea oil and gas production projects. In 1995, former U.S. Secretary of Defense Dick Cheney joined Halliburton as president and CEO. Then in 1996, as part of its mission to provide total solutions to customers, Halliburton acquired Landmark Graphics Corporation, which provides leading-edge software systems and services. It also introduced a Shared Services arrangement and further realigned its business units to enhance growth and improve operating efficiencies. Halliburton Company experienced a highly pivotal year in 1996. Its financial performance was the best it had been in more than a decade. In the spring of 1997, Cheney and the board of directors decided the time had come to eliminate the separate management group structures and combine all the business units under the Halliburton Company umbrella. Halliburton, Brown & Root and now Dresser Industries. The names are synonymous with success. They share a common history of technological leadership, operational excellence and innovative business relationships. They share a common vision for doing business in the 21st century a vision not unlike their founders' to be the best in the world.