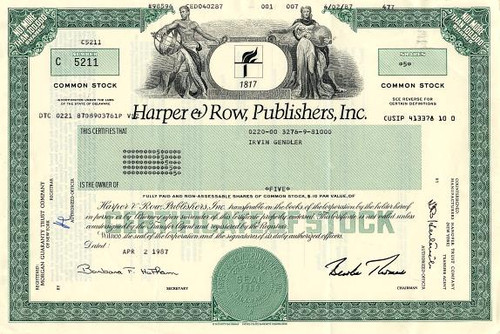 Beautiful certificate from the Harper & Row, Publishers issued in 1987. This historic document was printed by United States Banknote Company and has an ornate border around it with a vignette of an allegorical man and woman. This item has the signatures of the Company's Chairman and Secretary and is over 20 years old.

Certificate Vignette
Harper & Row was a publishing company based in New York City. It was formed through the 1962 merger of Harper & Brothers with Row, Peterson & Company. It was acquired by News Corporation in 1987 and combined with the publisher William Collins, Sons & Co, a British company, in 1990 to form HarperCollins.