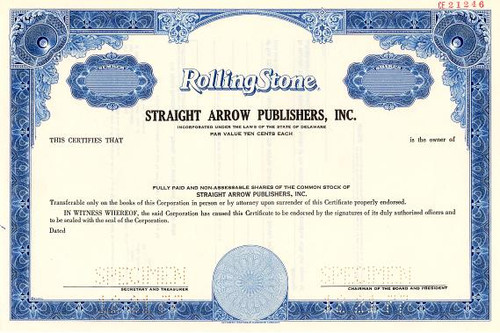 Beautiful engraved RARE specimen certificate from the Rolling Stone Straight Arrow Publishers dated in 1977. This historic document was printed by Security-Columbian Banknote Company and has an ornate border around it with a vignette of the company name. This item is over 30 years old.

Certificate Vignette
Jann S. Wenner (born 7 January 1946 in New York City) is the co-founder and publisher of the pop music biweekly Rolling Stone, as well as the owner of Men's Journal and Us Weekly magazines. Wenner's parents divorced in 1958, and he and his sisters, Kate and Merlyn, were sent to boarding schools to live. He graduated from high school at Chadwick School in 1964 and went on to attend the University of California at Berkeley. Before dropping out of Berkeley in 1966, Wenner was active in the Free Speech Movement and produced the column, "Something's Happening," in the student run newspaper, The Daily Californian. In 1967, Wenner founded Rolling Stone in San Francisco with his mentor, San Francisco Chronicle jazz critic, Ralph J. Gleason. To get the magazine off the ground, Wenner borrowed $7500 from family members and from the family of his soon-to-be wife, Jane Schindelheim. In the summer following the start of the magazine, Wenner and Schindelheim were married in a small Jewish ceremony. With an eye for talent, Wenner backed the careers of writers such as Hunter S. Thompson, Joe Klein, Cameron Crowe and Joe Eszterhas. Wenner also discovered photographer Annie Leibovitz when she was a 21 year old San Francisco Art Institute student. Many of Wenner's proteges, such as the writer/director Cameron Crowe credit him for giving them their biggest break. Tom Wolfe recognizes Wenner's influence in ensuring that his first novel, The Bonfire of the Vanities, was completed, stating "I was absolutely frozen with fright about getting it done and I decided to serialize it and the only editor crazy enough to do that was Jann." In 1977, Rolling Stone shifted its base of operations from San Francisco to New York City. The circulation of Rolling Stone dipped briefly in the late 1970s/ early 1980s as Wenner's crew was slow to cover the emergence of punk rock and again in the 1990s, when the middle-aged magazine lost ground to Spin and Blender in coverage of hip-hop. Wenner hired former FHM editor Ed Needham, who was then replaced by Will Dana to turn his flagship magazine around, and by 2006, Rolling Stone's circulation was at an all-time high of 1.5 million copies sold every fortnight. In May 2006, Rolling Stone published its 1000th edition with a holographic, 3-D cover modeled after The Beatles Sgt. Pepper's Lonely Hearts Club Band album cover. Wenner has also had a hand in the writing of many of Rolling Stone's famous Rolling Stone Interviews. More recently, his writing has been politically-centered. He interviewed Bill Clinton, Al Gore and John Kerry for the magazine during their election campaigns and in November 2005 had a major interview with U2 rockstar Bono, which focused on music and politics. Wenner's interview with Bono was nominated for a National Magazine Award. Rolling Stone and Jann Wenner are chronicled in two books, Gone Crazy and Back Again as well as Rolling Stone: The Uncensored History. Former Rolling Stone journalist David Weir is working on a biography, as is poet and Beat historian Lewis MacAdams. Wenner founded the magazine Outside in 1977, William Randolph Hearst III and Jack Ford both worked for the magazine. He also briefly managed the magazine Look and in 1993, started the magazine Family Life. In 1985 he bought a share in Us magazine, followed by a joint purchase of the magazine with The Walt Disney Company the following year. The magazine went weekly in 2000 and after a rocky start now reaches over 11 million readers a week. Most recently, in August of 2007, Wenner bought out Disney and now owns 100% of the magazine. Wenner and his wife separated in 1995, though Jane Wenner still remains a vice president of Wenner Media. She and Wenner have three sons, Alexander Jann, Theo, and Edward Augustus. Since 1995, Wenner's companion has been Matt Nye, a fashion designer. The two men have a son, Noah Jasper Nye Wenner (b. 2006-08-20) who was conceived with a surrogate. Working with a small group of distinguished record company heads and music industry professionals, Wenner co-founded the Rock and Roll Hall of Fame Foundation in 1983. In 1985, he appeared in the movie Perfect with Jamie Lee Curtis and John Travolta. He also had cameo roles in Cameron Crowe's films Jerry Maguire and Almost Famous. The American Society of Magazine Editors inducted Wenner into their Hall of Fame in 1997, making him the youngest editor ever inducted. In 2004, Wenner was inducted into the Rock and Roll Hall of Fame in the Lifetime Achievement category. Wenner also made a guest "appearance" in the Marvel Comic "Daredevil" issue 100 in 1973, in which he interviews the Superhero, who is thereby motivated to remember his origins (which he shares with the readers of the comic, but not with Wenner.) In the fall of 2007, Wenner published an oral biography of Hunter S. Thompson titled "Gonzo: The Life of Hunter S. Thompson." Co-written with Corey Seymour, this work traces the life of Thompson as told though the stories of those closest to him. About Specimens Specimen Certificates are actual certificates that have never been issued. They were usually kept by the printers in their permanent archives as their only example of a particular certificate. Sometimes you will see a hand stamp on the certificate that says "Do not remove from file". Specimens were also used to show prospective clients different types of certificate designs that were available. Specimen certificates are usually much scarcer than issued certificates. In fact, many times they are the only way to get a certificate for a particular company because the issued certificates were redeemed and destroyed. In a few instances, Specimen certificates we made for a company but were never used because a different design was chosen by the company. These certificates are normally stamped "Specimen" or they have small holes spelling the word specimen. Most of the time they don't have a serial number, or they have a serial number of 00000. This is an exciting sector of the hobby that grown in popularity over the past several years.