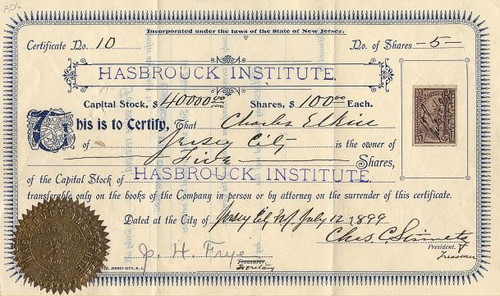 Beautiful RARE certificate from the Hasbrouck Institute issued in 1899. This historic document has an ornate border around it. This item has the signatures of the Company's President and Secretary and is over 109 years old. The Hasbrouck Institute opened on the present site of Lincoln High School in September of 1893 with 305 students. The stately looking building at the corner of Crescent and Harrison Avenues was Romanesque in design with modifications as required for its use as a classroom building in an urban environment. By all appearances it was suited for the classical studies that it provided its students. The construction of the walls was of red brick with brownstone trimmings. Iron was generously used to bind the walls and sustain the floors and roof; iron girders and concealed columns added to the stability of the building. The first floor included a library, kindergarten, and assembly hall with a seating capacity for approximately 800. This was not the initial site for the Institute. It was first located at the present location of Numbers 53 and 55 on Mercer Street when it was founded in 1856 and then relocated to the Lyceum Classical School (1839-59) at 109 Grand Street that was founded by William L. Dickinson. Professor Washington Hasbrouck established the private school for the purpose of educating young men in Jersey City to attend the foremost colleges and universities in the United States and thereby prepare them for future public service and leadership. Hasbrouck had previously started a similar school in Saugerties, NY, before moving to Jersey City. He remained with the Institute until 1876, when he became the principal of the State Normal School at Trenton (now the College of New Jersey). A girls' department was added to the Institute in 1880 with a continuation of its program extending from kindergarten to high school. To accommodate the growing population in the area of Jersey City Heights, property was acquired in 1892 at the corner of Crescent and Harrison Avenues. A number of prominent Jersey City leaders graduated Hasbrouck Institute. Among them were: John T. Rowland, the architect for the city of Jersey City for over forty year who designed the Medical Center, and Dickinson and Snyder high schools and the A. Harry Moore School, among many of the city's schools; Joseph Dear II, an editor and publisher of the Jersey Journal; Charles Henderson, son and succeeding president of the Peter Henderson Company; and George M. Culver, MD, a president of St. Francis Hospital and a president of the Hudson County Medical Society. The availability of similar educational programs in the Jersey City public schools soon affected the enrollment at the private school, and the city was looking to build more schools. In 1912 the Jersey City Board of Education purchased the Hasbrouck Institute for $117,000 for a new high school. The acquisition was viewed in a New York Times article as an indicator of "the growth and progressiveness of Jersey City" (11 August 1912). Since the Institute was on a large site on the crest of the Jersey City heights, $5000 was appropriated to renovate the building to serve as a public school while Rowland prepared for the new school, to be known as the Lincoln High School, on the grounds. The Hasbrouck Institute building was razed by 1920. "New Business Centre in Jersey City Rapidly Developing on the Heights." New York Times 11 August 1912. "Professor Washington Hasbrouck." New York Times 26 February 1895.