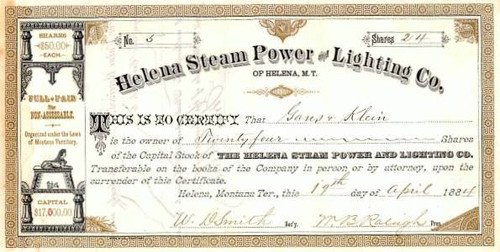 Beautifully engraved certificate from the Helena Steam Power and Lighting Co. issued in 1884. This historic document has an ornate border around it with a vignette of an egyptian sphinx and columns and thiere is an embossed corporate seal. This item is hand signed by the Company's President ( M. B. Raleigh ) and Secretary and is over 121 years old. The certificate was issued when Montana was still a Territory. On May 26, 1864, President Lincoln signed an enabling act creating Montana Territory. Twenty-five years later, on November 8, 1889, Montana became the forty-first state.