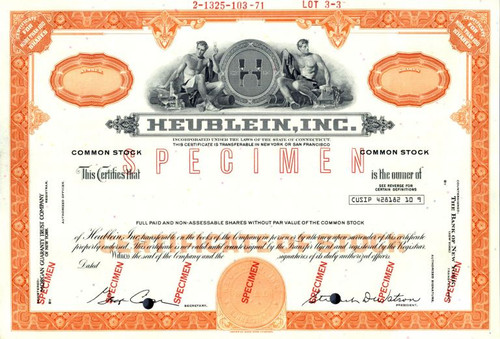 Beautiful engraved specimen stock certificate from the Heublein, Inc printed in 1971. This historic document was printed by American Bank Note Company and has an ornate border around it with a vignette of two allegorical men flanking the company's logo. This item has the printed signatures of the Company's President and Secretary and is over 44 years old. 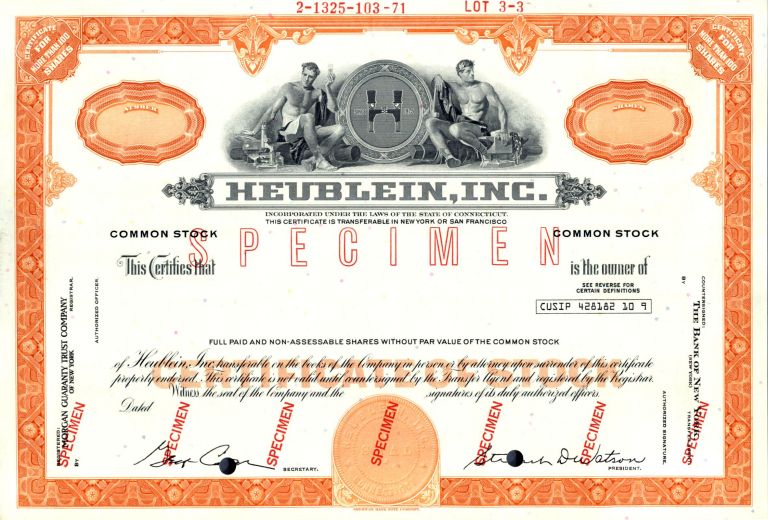 Certificate
Heublein Inc. (also known as Heublein Spirits) was an American producer and distributor of alcoholic beverages and food throughout the 20th century. During the 1960s and 1970s its stock was regarded as one of the most stable financial investments, earning it inclusion in the Nifty Fifty. In 1982, the R. J. Reynolds Tobacco Company acquired Heublein Inc. for $1.4 billion. In the corporate reorganizations that followed the merger of R.J. Reynolds and Nabisco, the resulting corporation, RJR Nabisco, began selling off many of Heublein's assets. RJR Nabisco sold Kentucky Fried Chicken to Pepsico in 1986 and sold the Heublein division and its alcoholic beverage brands to Grand Metropolitan in 1987. In 1995, RJ Reynolds sold the Ortega Mexican foods product line. About Specimens Specimen Certificates are actual certificates that have never been issued. They were usually kept by the printers in their permanent archives as their only example of a particular certificate. Sometimes you will see a hand stamp on the certificate that says "Do not remove from file". Specimens were also used to show prospective clients different types of certificate designs that were available. Specimen certificates are usually much scarcer than issued certificates. In fact, many times they are the only way to get a certificate for a particular company because the issued certificates were redeemed and destroyed. In a few instances, Specimen certificates we made for a company but were never used because a different design was chosen by the company. These certificates are normally stamped "Specimen" or they have small holes spelling the word specimen. Most of the time they don't have a serial number, or they have a serial number of 00000. This is an exciting sector of the hobby that grown in popularity over the past several years.