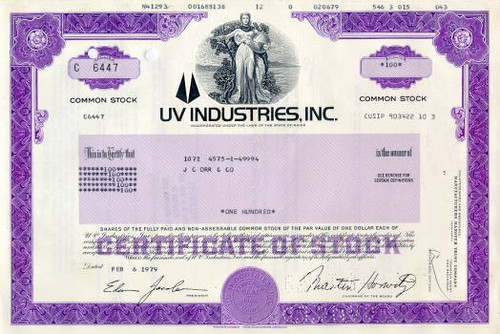 Beautifully engraved Certificate from the famous UV Industries, Inc issued in the 1970's. This historic document was printed by the Security Banknote Company and has an ornate border around it with a vignette of an allegorical woman holding a globe. This item has the printed signatures of the company's officers. Below is a summary of the ligiation that resulted from the company's damage to the eivironment: Between approximately 1908 and 1971, UV Industries, Inc., previously known as U.S. Smelting, Refining, & Mining Co., was engaged in ore milling operations at a 260-acre site in Midvale, Utah. During this time, UV Industries milled and refined ores of copper, lead and zinc at the Midvale property. The residues, or tailings, of these processes were pumped from the mill and piled or impounded at various locations throughout the site. In total, ten million tons of tailings were generated and dumped in piles that were up to fifty feet high. In 1971, all milling operations at the site ceased, but the tailings remained on the site in the same uncontained piles in which they originally were dumped. In 1979, UV Industries conveyed most of its assets, including the Midvale property, to Sharon Steel Corporation. UV Industries was subsequently dissolved, and all remaining assets were transferred to the Liquidating Trust. Between 1984 and 1986, the United States Environmental Protection Agency (EPA) determined that the Midvale property posed an imminent danger to the public health and environment owing to the actual or threatened release of hazardous substances from the toxic mine tailings on the property. The EPA subsequently initiated an action in federal district court against UV Industries, the Liquidating Trust, and Sharon Steel alleging liability under the Comprehensive Environmental Response, Compensation and Liability Act (CERCLA), 42 U.S.C. §and the Resource Conservation and Recovery Act (RCRA) 42 U.S.C. §for costs arising from the cleanup of the hazardous substances at the Midvale property. United States v. Sharon Steel Corporation et al. , No.(D. Utah filed Oct.1986). This action was subsequently consolidated with a second action, entitled United States v. Sharon Steel Corporation et al. , Civil Action No.(D. Utah filed Feb.1989), 1 which also asserted liability against UV Industries, the Liquidating Trust, and Sharon Steel for the clean-up of a slag site on the Midvale property. 2 During many, but not all of the years that UV Industries was in business, it purchased insurance to cover its operations. Aetna, Hartford, and AMICO issued consecutive comprehensive general liability insurance policies to UV Industries from January 1966 through April 1980: Aetna issued five policies from January 1966 to January 1971 with limits of $100,000; Hartford issued four policies from January 1971 to March 1975 with limits of $100,000; and AMICO issued three policies from Aprilto Aprilwith limits of $200,000 and $1,000,000. The Liquidating Trust gave timely notice of the EPA action to all the insurance companies. Although Aetna, Hartford, and AMICO all disputed whether their policies covered this type of damage, Aetna and Hartford nevertheless began paying the defense costs for UV Industries and the Liquidating Trust. 3 Hartford, however, limited its obligation to five percent of defense costs based on a pro rata formula of the number of years it provided coverage. In 1987, UV Trust and Sharon Steel filed actions in the state district court against several insurance companies, including Aetna, Hartford, and AMICO, to compel them to defend and indemnify UV Trust and Sharon Steel in the underlying action. These two state actions were subsequently consolidated. That same year, UV Trust and Sharon Steel sought a partial summary judgment declaring that Aetna, Hartford, and AMICO had a duty to defend. Ultimately, the trial court held that all three insurance companies had a duty to defend. 4 Subsequent to the court's ruling, Aetna continued to provide for the defense of the Liquidating Trust, ultimately contributing approximately 95% (about $10.5 million) of the total defense costs. Hartford's contribution continued to be limited to five percent ($500,000). AMICO never paid any defense costs. In July, 1991, although on notice that Aetna had paid a substantial amount in defense costs for the Liquidating Trust, and that Aetna had also requested contribution, AMICO and Hartford settled with Sharon Steel and the Liquidating Trust, paying $475,000 and $500,000 5 respectively, for a release from any further obligations. Specifically, the Hartford settlement agreement provided that: Upon final execution of this Agreement, Hartford shall have no further duties or obligations to Sharon, UV or UV Trust based upon, arising out of, or related in any way to the Hartford Policies .[and] shall have no further duties to pay any defense or indemnity costs in connection with the USA Actions. On August1991, Aetna filed its cross-claim against Hartford and AMICO seeking equitable subrogation and contribution for the defense costs it paid on behalf of the Liquidating Trust. 6 Upon motion for summary judgment, however, the trial judge held that Aetna did not have an action for equitable subrogation against Hartford or AMICO. The judge reasoned that since an insurer's subrogation right is derivative of the rights of its insured, the insured parties' settlement with Hartford and AMICO extinguished any claim that Aetna may have had for contribution. Aetna appeals to this court. It claims that the trial court erred in determining that the settlement extinguished Aetna's subrogation claim. AMICO also cross-appeals, claiming that if this court finds that Aetna does have a cause of action for equitable subrogation, the trial court erred in determining that AMICO had a duty to defend under its policies with UV Industries.