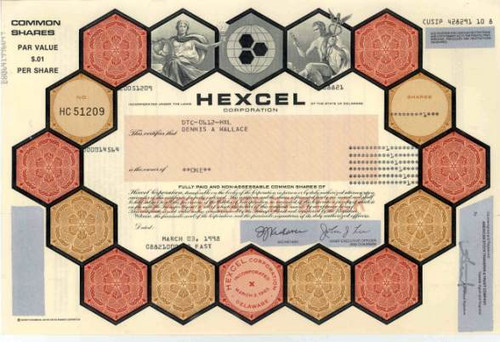 Beautifully engraved certificate from the Hexcel Corporation issued in 1998. This historic document was printed by the Security-Columbian Banknote Company and has an ornate hex border around it with a vignette of an allegorical man and woman with the company logo. This item has the printed signatures of the Company's President and Secretary. 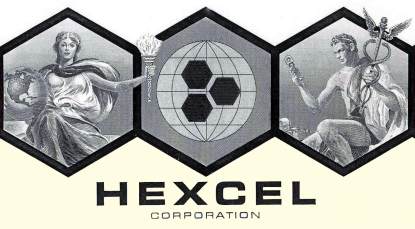 Certificate Vignette
The company that came to be known as Hexcel was born and raised in the San Francisco Bay area of Northern California, nurtured by a band of fraternity brothers from the University of California at Berkeley. In fact, the bonds that joined Hexcel's co-founders Roger C. Steele and Roscoe T. 'Bud' Hughes were forged even earlier than college, on the football fields of Piedmont High School, and were reinforced by their stints in the Navy together during World War II. From football contests to fraternity rites to fighting for their country, it's little wonder that Hexcel demonstrated a remarkable cohesion during its early, uncertain years. Hexcel Corporation: the world's leading advanced structural materials company. Following a series of acquisitions, Hexcel today is a global enterprise with over $1 billion in annual sales. Hexcel is one of the largest US producers of carbon fiber; the world's largest weaver of structural fabrics; the leading global producer of fiberglass electronic materials; the number one producer of composite materials such as honeycomb, prepregs, film adhesives and sandwich panels; and a leading manufacturer of composite parts and structures. The company markets its products to customers in the commercial aerospace, space and defense, electronics, recreation and general industrial markets. Manufacturing facilities located in 10 countries around the world are operated by an experienced multinational management team. Hexcel materials are used on virtually every commercial and military aircraft produced in the western world, and in thousands of other products, from satellites and launch vehicles, to high speed trains and ferries, cars and trucks, cellular telephones, laptop computers, skis and golf clubs, and construction materials. Founded over 50 years ago, Hexcel has adopted corporate mission to combine people, materials and science to deliver superior performance to their customers.