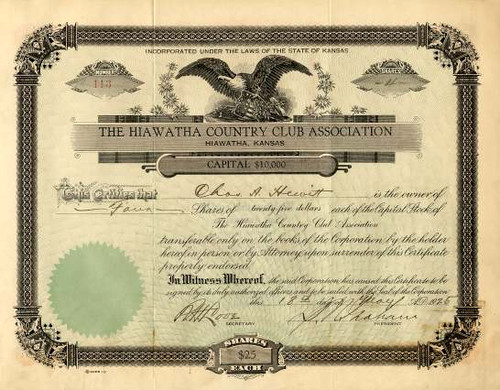 Beautifully engraved certificate from the Hiawatha Country Club Association issued in the 1920's. This historic document has an ornate border around it with a vignette of an eagle with a shield and arrows. This item is hand signed by the Company's President and Secretary and is 79 years old.

Certificate Vignette
Hiawatha was founded in 1857. John M. Coe, John P. Wheller, and Thomas J. Drummond were instrumental in organizing the town, and the site was staked out February 17, 1857. B.L. Rider reportedly was responsible for naming Hiawatha, taking the young Indian's name from Henry W. Longfellow's poem, "Song of Hiawatha." The main street was designated Oregon Street after the Oregon Trail. Parallel streets north of it were named after Indian tribes north of the Trail, and streets south carried tribal names of those south of the Trail. Hiawatha became the Brown County Seat in 1858, and the first school opened in 1870. Hiawatha is noted as the "City of Beautiful Maples," due to the brilliant foliage in the fall, and home of the world renowned Davis Memorial, a unique tomb featuring 11 life-size statues of Mr. and Mrs. John M. Davis. Since 1914, Hiawatha has been the site of the Halloween Frolic, the oldest such celebration in the nation, held on October 31. Hiawatha is located between the Kickapoo, Iowa and Sac-Fox Indian Reservations at the intersection of Highways 36 and 73 in northeast Kansas. History from city website.