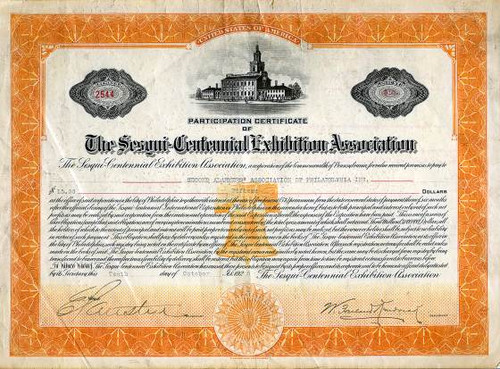 Beautiful certificate from the Sesqui-Centennial Exhibition Association issued in 1925. This historic document was printed by the E. A. Wright Banknote Company and has an ornate border around it with a vignette of old Philadelphia. This item has the signatures of the Association's President, W. Freeland Kendrick (Mayor of Philadelphia) and Secretary, and is over 84 years old. 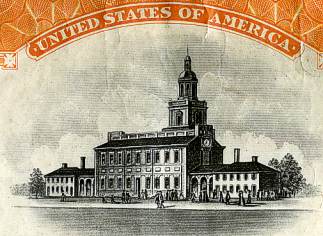 Certificate Vignette
In 1926, Philadelphia hosted a celebration commemorating the 150th anniversary of the founding of the United States. This Sesquicentennial Exposition drew exhibitors from around the world and featured speeches, sporting events, a military camp, and an 80 foot tall replica of the Liberty Bell covered in 26,000 light bulbs. The main entrance of the Sesquicentennial was located at the intersection of Broad Street and Packer Avenue and most of the grounds covered the area that is now the site of the Franklin Delano Roosevelt Park and various stadiums on the south side of the city. A map of the Exposition grounds is available at http://en.wikipedia.org/wiki/Sesquicentennial_Exposition. Despite a heavy rain, the New York Times estimated that 200,000 people traveled to the stadium located on the festival grounds to hear President Calvin Coolidge officially open the Sesquicentennial Exposition on July 5, 1926. After speeches by both President Coolidge and Mayor Kendrick, the President attended a luncheon and then visited Independence Hall, Christ Church, and Camden, New Jersey. Various other celebrities and political figures would visit the Sesquicentennial over the next month. The rain that plagued the opening ceremonies, however, would continue throughout much of the Exposition. For a variety of reasons, the Exhibition failed to make a significant amount of revenue and faced extreme financial difficulties. Eventually, several vendors brought legal action against the Exhibition for lack of payment and the entire festival was placed into equity receivership by the United States District Court on April 27, 1927. W. Freeland Kendrick (1873[1] March 20, 1953 was the Republican Mayor of Philadelphia from 1924-1928. He served as a delegate from Pennsylvania to the Republican National Convention in 1920, and served as the President of the Sesquicentennial Exposition in Philadelphia in 1926. Kendrick was also an active Shriner, serving as Potentate of Lulu Shrine from 1906-18, and again from 1920-23. He was elected Imperial Potentate from 1919-20 and served as the second chairman of the Board of Trustees of the Shriners from 1934-1949. While he was serving as Imperial Potentate, he put forth the resolution that created the Shriners Hospitals for Children. From 1949 until his death, he served on the Board of Trustees for the Philadelphia Shriners Hospital.[2] History from Wikipedia and OldCompany.com (old stock certificate research service).