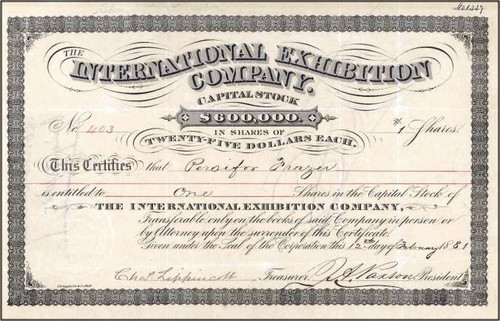 Beautiful stock certificate from the International Exhibition Company issued in 1881. This item is hand signed by the Company's President, J.A. Paxton and Treasurer and is over 135 years old. The certificate has been folded and is in fine condition. The company was incorporated in 1871. During the Centennial year of 1876, Philadelphia was host to a celebration of 100 years of American cultural and industrial progress. Officially known as the "International Exhibition of Arts, Manufactures and Products of the Soil and Mine," the Centennial Exhibition, the first major World's Fair to be held in the United States, opened on May 10, 1876 on a 285-acre tract of Fairmount Park overlooking the Schuylkill River. The fairgrounds, designed almost exclusively by 27-year-old German immigrant Hermann J. Schwarzmann, were host to 37 nations and countless industrial exhibits occupying over 250 individual pavilions. The Exhibition was immensely popular, drawing nearly 9 million visitors at a time when the population of the United States was 46 million. The most lasting accomplishment of the Exhibition was to introduce America as a new industrial world power, soon to eclipse the might and production of every other industrialized nation, and to showcase the City of Philadelphia as a center of American culture and industry. The International Exhibition Company was an organization chartered by an act of the Legislature of the State of Pennsylvania, for the purpose of conducting industrial exhibitions of American and foreign manufacturers and works of art. The company has purchased, from the centennial board of finance and the United States centennial commission, the main exhibition building, which was used during the international exhibition of 1876, for the industrial palace. The company has also obtained from the Fairmount park commission the right for the building to remain intact and used for a continuous international exhibition. The centennial exhibition of 1876 served to bring to the notice of the general public many new and valued products, and to create a demand for many works of industrial fine art, which had not, heretofore, found a market in this country. It is the object and intention of the directors of the International Exhibition Company to endeavor to continue the good effects, derived from the centennial, by af. fording unusually favorable facilities to manufacturers and producers to bring their wares to the further notice of the public. Sales will be permitted in the building, under such conditions as will be advantageous for the accomplishment of this object. Samples of goods donated to and accepted by the International Exhibition Company, will be exhibited, and information given as to prices, quality, etc., if so desired, without charge. Exhibitors are not charged for space, but a commission of ten per centum will be charged on all goods sold that are on exhibition, for either immediate or future delivery. Acceptable goods sent to the company for exhibition and sale will be returned, as per regulations, if unsold, or if sold, a commission of ten per centum will be charged."