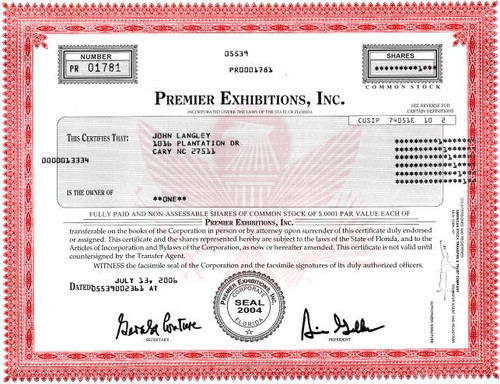 Uncancelled stock certificate from Premier Exhibitions, Inc. issued in 2006. This historic document was printed by the American Banknote Company and has an ornate border around it. This item has the printed signatures of the Company's President, and Secretary. The company owns RMS Titanic, which salvages and displays artifacts from the doomed Titanic ocean liner, runs a touring Titanic exhibit, and sells Titanic merchandise. It is considered the salvor-in-possession, or owner, of the wrecked ship. Premier's other exhibits include "Bodies...The Exhibition" and "Bodies Revealed" (preserved bodies and organs) and "Dialog in the Dark" (exploring a world without sight). Premier was created as a holding company in 2004 when it spun off RMS Titanic.