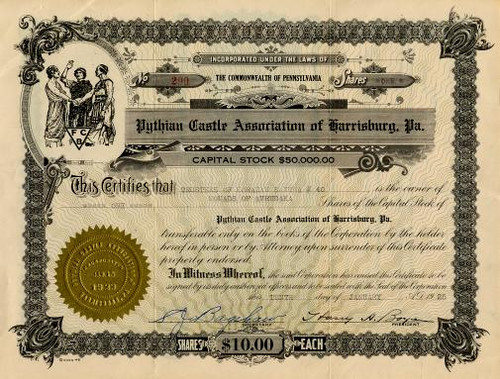 Beautifully engraved certificate from the Pythian Castle Association of Harrisburg,Pa issued in 1925. This historic document was printed by Goes and has an ornate border around it with a vignette of the organizations logo. This item is hand signed by the Company's President and Secretary and is over 80 years old. 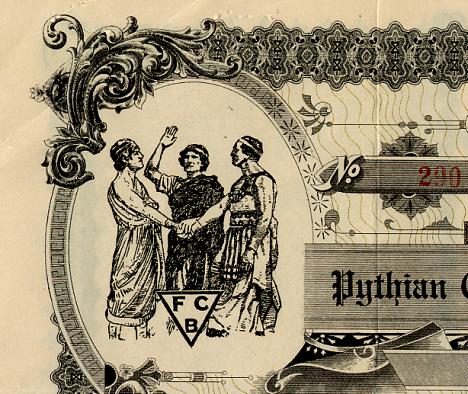 Certificate Vignette
The Knights of Pythias is a social brotherhood founded at Washington, D.C., February 19, 1864, by Justus Henry Rathbone and four others, to promote the principals of friendship, charity, and benevolence (FCB). The fundamental tenants of the order are "toleration in religion, obedience to law, and loyalty to government." Accepted candidates are advanced through the three ranks or degrees of Page, Esquire, and Knight. Justus Henry Rathbone, who had belonged to three other fraternities - the Sons of Malta, Red Men, and Masonic Lodge, initially prepared the ritual. In 1872, Right Reverend Bishop William Ussher of the Reformed Episcopalian Church, wrote an amplified version of the Knight Degree which featured a journey through Hades; by 1892, this otherworldly sojourn in the realm of Pluto had been translated into a philosophic discourse by Pythagoras. Local bodies are known as Lodges and meet in halls designated as Castles. The Governing body is the Supreme Lodge. Originally these were referred to as the Castle and Supreme Castle. The officers of the Lodge (or Castle) are: Chancellor Commander, Vice Commander, Prelate, Master of Work, Keeper of Records and Seal, Master of Finance, Master of Exchequer, Master at Arms, Inner Guard, and Outer Guard.