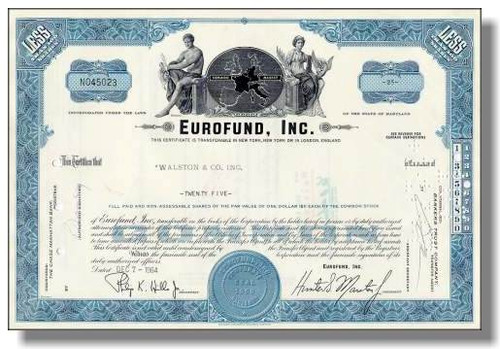 Beautifully engraved Stock Certificate from the Eurofund, Inc. issued in the early 1960's for shares of capital stock. This Early Common Market Fund invested in Company's of the Post WWII European Common Market. It's vignette has two allegorical figures sitting on both sides of an European Map which highlights the then Common Market members. The Common Market was the basis for the current European Union and the Euro Currency. The Marshall plan for European Recovery was a good short-term step, but many on both sides of the Atlantic thought that a long-term solution was needed. One of those was French Foreign Minister Robert Schuman, who conceived of a broad reaching common market in Europe. In 1951, he along with Adenauer and others formed the Coal and Steel Community, which served to, integrated those industries across national boundaries. The purpose of this integration was twofold. First it would give long term strength and growth to those industries which would make it less dependant on outside aid. It would also serve to bind Germany closer to Western Europe and hopefully lessen the possibility of revanchist aggression coming from Germany. This lead to series of initiatives on economic and defense matters. Most of these were steps taken by the Germans to regain the measures of sovereignty that they had lost under the occupation. In 1957, Germany, France, and others began negotiating to expand the Coal and Steel Community, which culminated in the Rome treaty, which founded the European Common Market. It has been expanding since. The certificate is facimile signed by the fund's President.