Beautifully engraved currency size certificate from the Holman Locomotive Speeding Truck Company issued in 1896. This historic document has an ornate border around it with a vignette of an engine and tender pulling two passenger cars. This item is hand signed by the Company's President, W. J. Holman and Secretary, S. L. White and is over 112 years old. 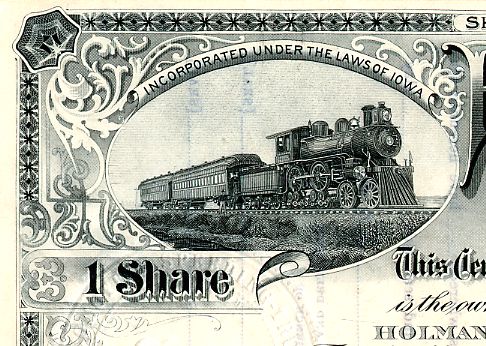 Old Picture of Locomotive shown for Illustrative Purposes
The Holman Locomotive Speeding Truck Company was a scam in the 1890's where the company made false claims of a locomotive with increased speed by using a special design of its wheels as shown below: History from Curiosities of Locomotive Design. Development of the Locomotive Engine, by Angus Sinclair. Railway and Locomotive Engineering--September-December, 1907 Holman's Absurdity. It might have been supposed that the Fontaine experiment would have deterred others from trying such an expensive experiment again; but when an amateur gets seized with the malady for designing a locomotive of an entirely new pattern, he generally produces something startling. In 1887 The Holman Locomotive Company had built in Philadelphia a locomotive. It was immediately assailed by practical railroad men and others for my opinion of this, the latest monstrosity. I had not seen even a picture of the engine, but descriptions were freely written. My opinion, expressed in LOCOMOTIVE ENGINEERING, was: "It is a humbug. It is sound engineering to hold that every piece added to a machine, after it has reached the practical stage, is a source of weakness. A triple set of wheels under a locomotive would be proposed only by one who is densely ignorant of mechanics." Next notice in the same paper reads: "There appears to have been some method in the madness of the parties who got out the absurd Holman locomotive. "They are advertising in Philadelphia papers that a company has been formed to sell this kind of locomotive, the capital stock being $10,000,000. They offer to sell the stock for $25 a share, the par value being $100. They make the claim that this sort of engine is destined to be the locomotive of the future." Next notice, also in the same paper, reads: "The parties exploiting the Holman locomotive are advertising their stock in numerous newspapers, and claiming that the invention is certain to come rapidly into general use. The effect of that has been that numerous letters have come to us asking our opinion of the thing. We gave a general answer, the first paragraph of which reads: "When we first heard of the Holman locomotive we supposed that it was the invention of some harmless crank who did not understand the elementary principles of mechanics, but we now believe that it has been, since its inception, an ostentatious machine designed to allure unwary capitalists into an investment which will be of the same real value as throwing gold coin over Niagara Falls."' The engine was run a few trips on a straight railroad in New Jersey, which was used merely as a stimulant to stock selling. Unfortunately many people with limited savings were allured, into investing their hard earned money in this swindle, and they might as well have given it to a highway robber. One painful case that was pushed to my attention will illustrate the danger of taking stock in things recommended by friends. Mrs. Marion French had sufficient money in United States bonds to produce her an income of $570 a year. Some idiotic friend advised her to invest in the Holman Locomotive Company's Stock, assuring her that she would more than double her income without risk. Our washerwoman never loses a chance to ask me when the Holman Locomotive Company will begin paying dividends.