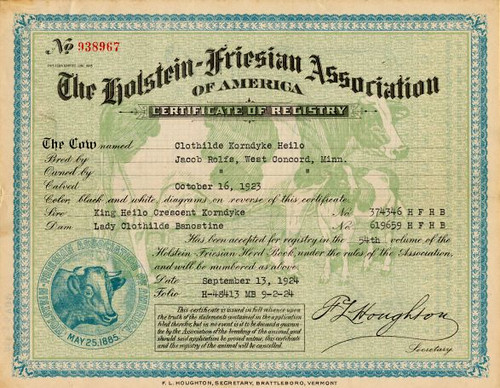 Beautifully engraved Certificate of Registry from the Holstein Friesian Association of America issued in 1924 or earlier. This historic document has an ornate border around it with an underprint of a cow and a calf and a vignette of the Associations Logo. This item has the printed signatures of the Company's Secretary and is over 82 years old. 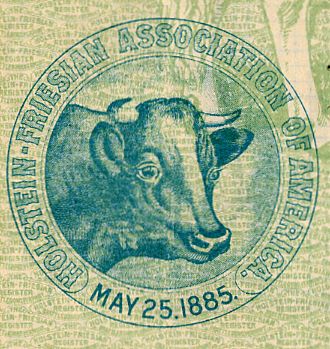 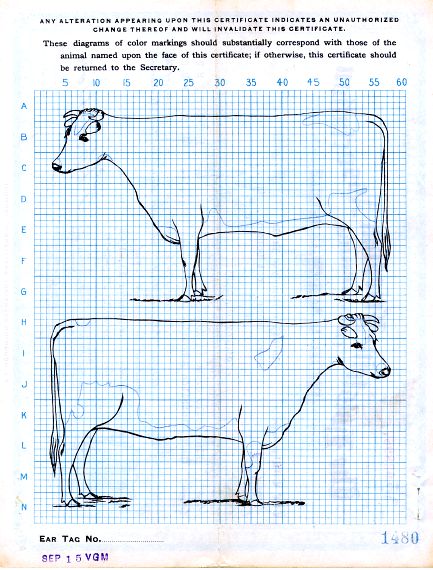 Back of Certificate
The Holstein cow originated in Europe. The major historical developement of this breed occured in what is now the Netherlands and more specifically in the two northern provices of North Holland and Friesland which lay on either side of the Zuider Zee. The original stock were the black animals and white animals of the Batavians and Friesians, migrant European tribes who settled in the Rhine Delta region about 2,000 years ago. For many years, Holsteins were bred and strictly culled to obtain animals which would make best use of grass, the area's most abundant resource. The intermingling of these animals evolved into an efficient, high-producing black-and-white dairy cow. Imports to America After the New World was settled, and markets began to develop for milk in America, dairy breeders turned to Holland for their seed stock. Winthrop Chenery, a Massachusetts breeder, purchased a Holland cow from a Dutch sailing master who landed cargo at Boston in 1852. The cow had furnished the ship's crew with fresh milk during the voyage. She proved to be such a satisfactory producer, that Chenery made later importations of Holsteins in 1857, 1859 and 1861. Many other breeders soon joined the race to establish Holsteins in America. After about 8,800 Holsteins had been imported, cattle disease broke out in Europe and importation ceased. Americans Build Their Own Breed In the late 1800's there was enough interest among Holstein breeders to form associations for the recording of pedigrees and maintenance of herdbooks. These associations merged in 1885 to found the Holstein-Friesian Association of America, the Holstein Association. History from OSU.