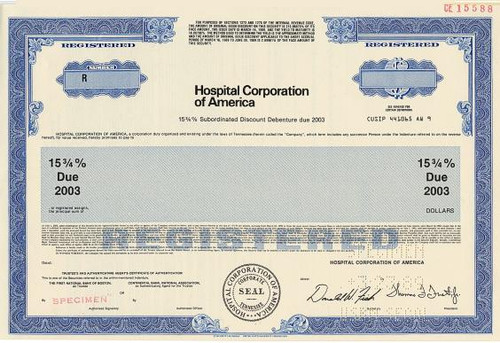 Beautiful engraved specimen certificate from the Hospital Corporation of America dated in 1989. This historic document was printed by United States Banknote Company and has an ornate border around it. This item has the printed signatures of the Company's President and Secretary and is over 18 years old. The Hospital Corporation of America (HCA) is the largest private operator of health care facilities in the world. It is based in Nashville, Tennessee, United States and is widely considered to be the single largest factor in making that city a hotspot for healthcare enterprise. The founders included two members of the Frist family, which became very wealthy as a result. The former majority leader of the U.S. Senate, Bill Frist is a member of the family and has a substantial stake in the company. Most of his $20 million (or more) personal fortune was made through his holdings in HCA. Jack O. Bovender, Jr., is the Chief Executive Officer of HCA. In the late-1990s, after a merger with Louisville-based Columbia Hospital Corporation which formed Columbia/HCA, the company was investigated by the government for Medicare and Medicaid fraud and paid a settlement of $1.7 billion, the largest fraud settlement in US history at the time. Then-CEO Rick Scott resigned but no criminal prosecutions resulted. The name subsequently reverted to "Hospital Corporation of America." HCA abandoned the use of its name in its home market and instead promotes its Nashville hospitals under the TriStar brand. On June 13, 2005, Senator Frist reportedly instructed the trustee managing his HCA shares to sell all of his stock. The sale took place in July, two weeks before disappointing earnings sent the stock on a 15-point plunge. In November 2006 HCA was acquired by Kohlberg Kravis Roberts, Bain Capital and Merrill Lynch Global Private Equity in the largest leveraged buyout (LBO) in history, adjusted for inflation. History from Wikipeida and OldCompanyResearch.com. About Specimens Specimen Certificates are actual certificates that have never been issued. They were usually kept by the printers in their permanent archives as their only example of a particular certificate. Sometimes you will see a hand stamp on the certificate that says "Do not remove from file". Specimens were also used to show prospective clients different types of certificate designs that were available. Specimen certificates are usually much scarcer than issued certificates. In fact, many times they are the only way to get a certificate for a particular company because the issued certificates were redeemed and destroyed. In a few instances, Specimen certificates we made for a company but were never used because a different design was chosen by the company. These certificates are normally stamped "Specimen" or they have small holes spelling the word specimen. Most of the time they don't have a serial number, or they have a serial number of 00000. This is an exciting sector of the hobby that grown in popularity over the past several years.